Federal CIO looks to cost optimization, coordinated procurement, and lessons learned from the private sector in his plans to help agencies do more with less.

Federal Data Center Consolidation Makes Progress
(click image for larger view and for slideshow)
U.S. CIO Steven VanRoekel introduced Wednesday a draft outline of the federal mobility strategy that aspires to do more with less, partly by being more assertive in pushing the private sector to deliver products and services that meet government requirements.

"We have a really great opportunity to cut costs while increasing our productivity," he said during a keynote luncheon at the CES Government conference in Las Vegas. "We have to use the size of the federal footprint and our buying power to change how we do things."

VanRoekel acknowledged that the government could use mobile technology more effectively. "As I look across the way we use mobile in government, it's very fragmented," he said, citing the number of different device procurement contracts within agencies, as well as gaps in standards and governance.

1. Incorporate the potential of mobile technology into federal government activities;
2. Build mobile technologies and services so they can be reused and shared among agencies and public developers;
3. Manage mobile and wireless acquisition, as well as inventory and expenses efficiently;
4. Create a government-wide foundation to provide mobility services across all agencies;
5. Promote collaboration to enhance mobility technology across government; and
6. Set up a governance structure for federal mobile efforts.

[ Find out about Google's vision for Android in the home. Read Google's Schmidt: Android's Rising Tide Benefits All. ]

Federal IT is under a lot of pressure, said VanRoekel. Cybersecurity pressures have never been greater, while fiscal pressures make it imperative to innovate at a lower cost. At the same time, he said, citizens expect more from their government.

The government clearly needs a plan because mobile devices have become essential in federal agencies. A survey of 200 federal IT workers conducted by research firm Fabrizio, Ward, & Associates in December, 2011, on behalf of Washington, D.C.-based communications firm Bluetext, found that 45% of federal IT employees use mobile devices for their jobs on a daily basis. E-mail apps represent the most popular apps, used by 93% of respondents. And Facebook is surprisingly popular, used by 68% of respondents. 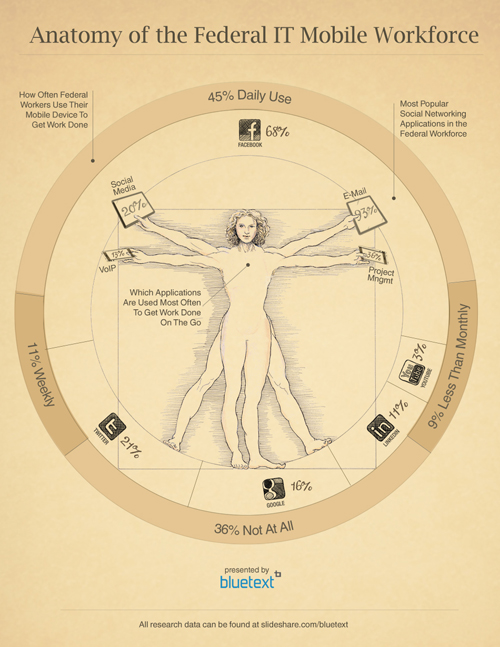 VanRoekel is not alone in proposing plans. The Department of Defense is preparing to release its own mobile strategy, NIST is working on mobile guidelines, and the General Services Administration is working on strategic sourcing.

Perhaps unsurprisingly in an election year, cost-cutting is one of VanRoekel's primary goals. He noted that substantial savings are expected from streamlining government data centers. There are some 3,000 now and VanRoekel expects there will be 1,000 fewer by 2015.

Savings could also come from a unified federal acquisition program. As an example of the cost inefficiency facing government agencies, he pointed to the fact that he'd found people paying prices ranging from $20 to $120 for unlimited mobile data access within the same agency.

VanRoekel wants to "rethink spectrum use." He cited the inability of conference attendees to reliably check their email on mobile devices as a sign that wireless operators are not serving customers well enough.

Smarter IT development is also part of the picture. VanRoekel described how, during his tenure as managing director of the Federal Communications Commission, he had asked a procurement team to put together a proposal for building a mobile broadband speed test app. The estimated cost to create one with 100,000 records came back at over $1 million.

"I didn't have $1 million," he said. "I had $5,000." So he hired a mobile app developer, who created apps for iOS and Android. After announcing the app over Twitter, the app was downloaded more than 2.5 million times. Those who installed the app tended to use it between 10 and 15 times, resulting in millions of crowdsourced data points about real-world broadband speeds.

"One of the proudest moments of my life was when I got a call from Steve Jobs who said he loved the app because [it gave him data to negotiate with AT&T]," said VanRoekel.

With the publication of the draft mobile strategy outline, VanRoekel said he wanted to hear from the public about the plan. In 60 days, his goal is to release the federal mobility strategy, based on feedback. In 180 days, he hopes to see coordinated acquisition mechanisms for mobile across the federal government. And within 12 months, he aims to see the plan fully implemented.

"We truly have an opportunity to change the way we do things in a cost-effective way, and to make us more efficient in everything we do," he said.

We welcome your comments on this topic on our social media channels, or [contact us directly] with questions about the site.
Comment  |
Email This  |
Print  |
RSS
More Insights
Webcasts
Architecting Security for the Internet of Things
The Pesky Password Problem: Policies That Help You Gain the Upper Hand on the Bad Guys
More Webcasts
White Papers
Why Chatbots Are So Popular Right Now
Fact-Check Your Ransomware Assumptions
More White Papers
Reports
The State of Cloud Computing - Fall 2020
Meetup Vulnerabilities: Escalation of Privilege and Redirection of Funds
More Reports