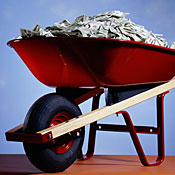 That's the finding from a research study released this week out of the University of Maryland's Robert H. Smith School of Business.

"Spending time and energy tweaking your business plan is a waste of resources," said researcher David Kirsch, associate professor of management and entrepreneurship. "It's a limited-use document that will in no way substitute for the hard work of actually building a business.

Kirsch, along with co-authors Brent Goldfarb and Azi Gera, reviewed the business plans of more than 700 dot-com companies from the late-1990s to early-2000s boom era. They compared records from a broad sample of dot-coms Kirsch maintains in his Business Plan Archive, a historical research and preservation project supported by the Library of Congress' National Digital Information Infrastructure Preservation Program.

The researchers compared objective characteristics of each business plan -- including the contents, team make-up, and business model -- and whether the plan received venture capital funding. Their research, "Form or Substance? The Role of Business Plans in Venture Capital Decision Making," will appear in the May 2009 issue of Strategic Management Journal.

Basically, Kirsch, Goldfarb, and Gera found that the content of the business plans does not predict which businesses get funded.

That's not to suggest that companies should totally forgo a business plan. But their research found no link between venture capital funding decisions and how well-crafted a business plan was.

So why do venture capitalists even want business plans if they don't use them to make funding decisions?

"I think VCs like the plans because they skim them to see what people are doing -- to get a sense of what entrepreneurial activity is happening," Goldfarb said. But an interested VC will learn the details of a business whether it is in the plan or not.

In additional VC deal news, Cell Biosciences on Thursday said it has raised $10 million in a third round of funding. The Palo Alto-based life sciences firm makes hardware, software, and analytical products designed to reveal information about cellular control pathways. Cell Biosciences president and CEO Tim Harkness called the combination proteomics technology and was excited that he could bring his technology to the broad life sciences market.

Is your company getting venture funding? Is your VC one of the first to grab a rising star? Drop me a line and let me know.