SEARCH
A minimum of 3 characters are required to be typed in the search bar in order to perform a search.
Announcements
Event
Enterprise Connect 9/27-9/29 - Time is running out, secure your FREE Virtual Pass today!
PreviousNext
Mobile
Feature

What CIOs Must Know About The Wireless 'Spectrum Crisis' 2

Wireless is becoming an increasingly important piece of the enterprise architecture.
InformationWeek Staff
Contributor
October 22, 2009
Julius Genachowski, chairman of the Federal Communications Commission, is worried. Not today, or even this year, but soon, he thinks the United States won't be able to meet the demand for broadband wireless data. "The biggest threat to the future of mobile in America is the looming spectrum crisis," he told a wireless conference earlier this month.

You should be worried, too--or, at the least, be paying attention. Mobile data will be an increasingly important piece of the enterprise IT architecture, and also part of more products that companies provide. CIOs need to identify network-centric trouble spots today, as new wireless opportunities arise and well before anything resembling a "crisis" hits.

Blame the iPhone. The first widespread use of wireless data began with the RIM BlackBerry in the mid-1990s, but it's the iPhone that's made wireless data a mass-market phenomenon. It's changing what people--employees and customers--expect to be able to do with their smartphones and how they interact with companies. This one blockbuster device has generated enough of a network load that iPhone owners complain about resulting poor service, including dropped calls, delayed messages, and slow download speeds.

Yet it's more than smartphone apps that should have CIOs thinking about wireless spectrum. Sprint this month created a business unit to sell use of its spectrum for devices other than phones to share data. Those devices include anything from Amazon's Kindle book reader, to a water meter that sends usage data, to a cash register (see story, "Follett Runs Some Stores On 3G Networks", available via download of our free PDF of this week's InformationWeek magazine registration required).

But there are limitations to today's wireless networks, and they're going to get bigger. Don't count on so-called 4G technologies to save the day, at least not for many years. Until then, CIOs must understand the effect on applications when the network gets overloaded, and plan accordingly. 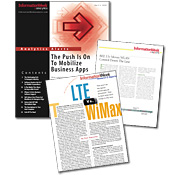 Enterprise Mobility
How companies are pushing to mobilize
LTE Vs. WiMax
This won't be a typical
802.11v Ahead
Upcoming standard could help companies get a grip on wireless
See all our InformationWeek Analytic Reports
Demands On The Network

A good place to start is the actual demand compared with network capacity. Cisco, in a January report, predicted that mobile data traffic will more than double every year through 2013, at which time it will reach 2 exabytes-- 2 billion GB--per month. Think Cisco believes its own numbers? This month, it struck a $2.9 billion deal to buy Starent Networks, whose equipment helps wireless carriers deliver multimedia and other data-intensive features.

The wireless industry is petitioning the FCC to allocate additional spectrum over the next six years to more than double the industry's licensed spectrum. FCC Chairman Genachowski sounds sympathetic. "Even with innovative spectrum policies and innovative new technologies, experts believe we are way too likely to be caught short," he said at the CTIA conference this month.

IT managers should care because congested networks are slow and, worse, unpredictable. As throughput rates decrease and packet delays increase, some applications start behaving erratically, as we'll discuss.

It's not panic time. We haven't yet reached widespread saturation on today's 3G networks, but given current market growth, it will likely happen without the timely addition of new spectrum. And given the multiyear process for identifying, auctioning, and deploying new wireless spectrum, spectrum might not become available fast enough to accommodate the rising tide of smartphones and data-hogging applications. The Cisco report states that smartphones generate more than 30 times the traffic of basic cell phones; laptops with wireless modems 450 times the traffic.