Why Apple Is IT's Arch Frenemy - InformationWeek

Apple devices are supported in nine out of 10 companies, our research finds, but IT needs ways to manage them more efficiently and securely.

Our Apple Outlook Survey is decisive: More than 90% of the 331 IT decision-makers that we surveyed either already support iPhones and iPads or have plans to do so. Even more surprising is that more than 80% support or plan to support Mac laptops and desktops. The kind of sea change that represents can't be overstated -- not that long ago Apple's presence in the enterprise, outside of a few core markets, was negligible.

But is IT really on board or just bowing to pressure from users enamored of their iDevices? Judging by the mostly negative comments from the laptop, desktop and mobile device decision-makers who responded to the InformationWeek survey, there's reason to believe IT would like nothing more than to go back to the days of top-down hardware purchasing.

"Apple products are nice, but they are not really suited to the enterprise because we have no means of ensuring their security," says one respondent. "Apple is slow to release security updates for known exploits. Their products are fine for home use and small business, but they have an outdated approach to security that is not really acceptable for Fortune 500 companies."

Until Apple can offer competitive management functionality, including complete integration with Active Directory, Group Policy and Exchange, "they will not be an IT enterprise 'go-to' solution," an IT director at a healthcare company says.

Our full report on InformationWeek's Apple Outlook Survey is free with registration.

That attitude also shows up in the data center. When Apple abruptly killed its well-regarded Xserve rack-mount server line two years ago, IT pros saw it as one more bit of proof that Apple isn't a reliable enterprise partner. And not a whole lot has changed since.

Our survey underscores that IT still isn't enthusiastic about having Apple gear in the data center. No surprise that 64% of the IT decision-maker respondents have no Apple servers even though Apple still sells a server OS and server configurations for its Mac Pro and Mac Mini lines.

Apple appears to be "abandoning its long-term customers in an effort to jump with both feet into the mobile and tablet market, and we have had to re-evaluate our long-term plans for hardware and software accordingly," says a higher-education services coordinator. Apple's new software is "amateur" compared with previous offerings, he says, noting that Apple is changing its operating system to look and work like iOS. "It truly adds insult to injury after having gone 'against the current' championing them for so long," he says. 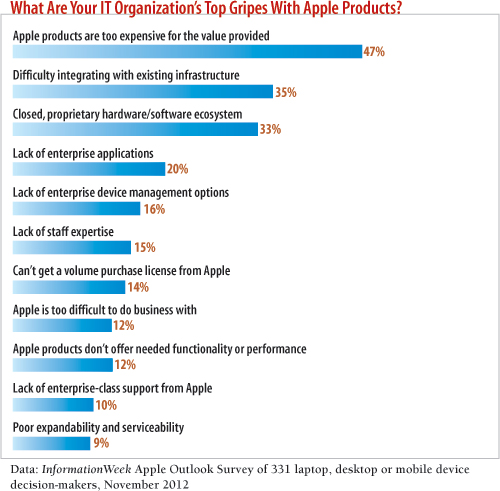