Microsoft Windows Phone users must now be running the 7.5 update to shop at Redmond's online store.
Paul McDougall
Editor At Large, InformationWeek
May 23, 2012 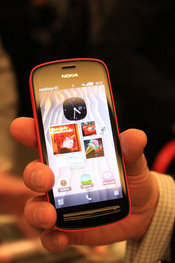 9 Hottest Phones At Mobile World Congress
(click image for larger view and for slideshow)
Windows Phone 7 users who have not yet installed the 7.5 "Mango" update as of Tuesday can no longer download or purchase apps from Microsoft's online Marketplace.

The software maker warned its mobile customers last month that this move was coming. "Marketplace is growing fast," said Microsoft program management director Mazhar Mohammed, in a blog post at the time.

Mohammed noted that the store now has more than 80,000 apps and is online in 54 countries. "Requiring Windows Phone 7.5 is part of a larger effort aimed at improving Marketplace performance and security and paving the way for even faster growth and more features," he said.

Windows Phone 7 users who have not upgraded will still be able to browse, but they will receive an error message if they try to download or purchase an app or game or update previously installed apps. Microsoft released the Mango update in last August, so most users have likely already upgraded.

Mango adds more than 500 new features to the Windows Phone platform. Threads lets users glide between text, Windows Live Messenger, and Facebook chat within the same conversation. Groups lets users receive and send messages from predefined social or business circles directly to and from the Smart Tiles home screen. Contact Cards have been enhanced to include feeds from Twitter and LinkedIn in addition to the networks previously supported.

Mango also adds multitasking, which lets users move freely between applications and pick up and resume where they left off without having to restart apps. 4G wireless support is embedded, and for security-conscious enterprise customers, Mango adds support for various rights-management technologies. Additionally, it beefs up integration with authoring and collaboration tools like Lync and Office 365.

Web browsing is enhanced with native support for Internet Explorer 9, which on Windows Phone 7 will drive hardware-accelerated graphics rendering as it does on the PC.

The next update for Windows Phone is reportedly known as "Tango" internally at Microsoft. The company has yet to announce a release date or detail its features. Microsoft is also said to be working on Windows Phone 8 "Apollo," which could possibly debut later this year.