In his keynote address at Mobile World Congress, Facebook founder and CEO Mark Zuckerberg shared his vision of how drones could be used to deliver Internet services to poor populations, and talked about the future of Virtual Reality and Artificial Intelligence.

BARCELONA – In his keynote address on the opening day of Mobile World Congress here, Facebook founder and CEO Mark Zuckerberg offered an overview of Facebook's latest project: Bringing Internet access to the unconnected. Zuckerberg also announced a new open source telco project Facebook is undertaking in partnership with Nokia, Intel, and several carriers, and shared his views on the future of virtual reality and artificial intelligence.

Zuckerberg's plans for delivering Internet access to underserved regions includes a drone and laser beams. Within the year, he said, there could be a solar-powered drone with the wingspan of a Boeing 747 and the weight of a car that's able to remain airborne for three to six months. If stationed over regions that don't have existing connectivity infrastructure, it could offer a fast way to give those populations Internet access, according to Zuckerberg.

According to the Connected Society Programme, operated by GSMA, the trade association which hosts Mobile World Congress, 4 billion people around the world are unable to access the Internet today. Zuckerberg expressed his disappointment with the way the wireless industry is focusing on 5G network development. He earned a round of applause when he said building faster connections for rich people was not enough, that the industry needs to "finish our job" and get everyone on the planet connected.

Facebook's Internet.org initiative aims to bring "Internet access to the next billion" people in the poorest regions of the world. Connectivity isn't the only challenge facing the unconnected. Some simply can't afford to pay for data plans. With that in mind, the organization offers a service known as "Free Basics by Facebook," which provides a limited free data plan that enables users to experience select apps on basic smartphones. The service is available in 37 countries, according to Internet.org.

While this is a way to bring the Internet to millions of people who can't pay for data services, Facebook and the carriers involved in the program control which apps are made available and which are not. Because of this, the Indian government delivered a critical blow to that initiative two weeks ago. It declared the Free Basics service incompatible with the country's net neutrality rules. The Telecom Regulatory Authority of India, when announcing the decision, said that mobile phone companies should not be allowed to "shape the user's Internet experience" by excluding certain applications from the free data service.

In his MWC keynote, Zuckerberg said that, although he disagrees with the Indian government's decision, one thing he has learned so far through work with Internet.org is that "every country is different." Some solutions work well in some places and not in others, he noted. According to Zuckerberg, Internet.org will continue working in India, but with a different approach, working to lower the price for data services by helping operators reduce the cost of delivering data. 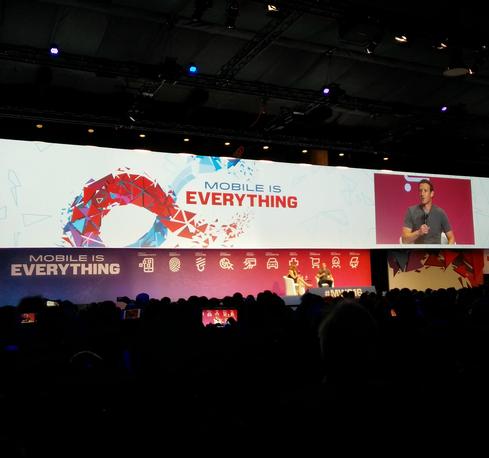 Zuckerberg also weighed in on a government issue closer to home: Apple's battle with the US government over whether it should override the operating system features of an iPhone used by one of the shooters involved in last year's mass shooting in San Bernardino, Calif., so that the FBI can gain access to data on the device.

Zuckerberg said he backed Apple CEO Tim Cook's decision to fight a federal order to develop a backdoor into the iPhone in question. "We're sympathetic with Apple on this one. We believe in encryption," he said. While acknowledging his company's responsibility to help fight terrorism, Zuckerberg said, "I don't believe that building backdoors is the right thing to do."

Meanwhile, for its telco project, Facebook is working with Nokia, Intel, and several wireless carriers to create the Telecom Infra Project, an open source hardware and software platform designed to make it easier and faster to build communications networks. It's modeled on the Open Compute concept. According to Zuckerberg, such an undertaking would encourage competition and reduce overall costs of creating a communications network, which could translate into better pricing for consumers. Facebook has saved more than $1 billion with its Open Compute Project, he said.

Zuckerberg also made a surprise appearance on the eve of Mobile World Congress Sunday, during a Samsung event. There, he talked about a Samsung-Facebook alliance that would bring 360 streaming video to Samsung's Gear VR. The companies will also work on improved 3D and virtual reality experiences.

He expanded on that topic during his keynote, saying that the next thing for social media users will be to "share an immersive experience of moments of your life." He said he expects to use a 360 camera, such as the new Samsung Gear 360, to record the first steps of his daughter, who is now three months old.

Artificial intelligence is the next frontier, Zuckerberg said, and it is one of his own personal projects. Most AI at this stage is simply pattern recognition, he said, and not something to be alarmed about. But using pattern recognition has already delivered new applications in medicine and security, and will soon enable autonomous driving and simultaneous translation to come to market.

Pablo Valerio has been in the IT industry for 25+ years, mostly working for American companies in Europe. Over the years he has developed channels, established operations, and served as European general manager for several companies. While primarily based in Spain, he has ... View Full Bio
We welcome your comments on this topic on our social media channels, or [contact us directly] with questions about the site.
Comment  |
Email This  |
Print  |
RSS
More Insights
Webcasts
What We Can Learn from Sports Analytics
Making Cybersecurity Work in Small and Medium-Sized Businesses
More Webcasts
White Papers
Two-Factor Evaluation Guide
The State of Threat Detection and Response
More White Papers
Reports
The Drive for Shift-Left Performance Testing
2020 State of DevOps Report
More Reports

It is an interesting debate, and has been one of the topics on the show. Just as an example network vendor Ericsson had more than 10,000 people visiting their booth, which was a full show by itself, looking at 5G technologies.

3G, 4G and LTE still have a long way to go to be available in many countries. But we also need 5G to realize some of the new services such as Car-to-Car communications, 3D video and VR, and other critical applications.

Connecting the rest of the world is necessary, but many people have more inmediate needs that having access to Facebook.

I believe the aims of eliminating hunger and providing healthcare are more important goals that having all the planet on Facebook.
Reply  |  Post Message  |  Messages List  |  Start a Board

Zuckerberg is so spot on on 5G vs unconnected. In many parts of Asia and Africa the cities have 4G but rural neighbors a few 100 kid of these cities don't even have 2G. The regulators should stop making money from spectrum auction and focus on ensuring coverage for 95% of their population.
Reply  |  Post Message  |  Messages List  |  Start a Board
Editors' Choice
Hot Topics