NASA reveals its latest prototype of the "Z" series spacesuit, designed for humans to walk on Mars by the 2030s. 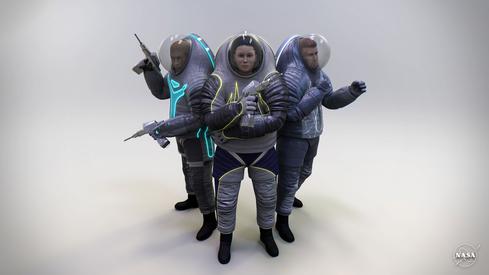 I am pretty sure there is a robotic project already in place. Robots, AIs, spaceship, spacesuit's final versions won't be really before the real date is closer. This one is going nowhere. :D #5 is very Buzz Lightyear. It's more cheerful looking than the gray ones, but I'm not sure they would want the Disney link there.
Reply  |  Post Message  |  Messages List  |  Start a Board

"the word "nano" was not used by NASA, considering the weight concerns, maybe Z-3 will not be the final version."

I believe there were many versions between this prototype and the final version. And that final version will be very different from the one in these pictures we see today.

As you said, nanotechnology can't be left out. IBM even created a 3D nano printer. Just imagine all the new things, materials, and technologies that will be available by when it's really time to think seriously about the this suit. This time it was just a teaser to entertain the masses.

"The "trends in society" design also uses electroluminescent wire. It has a bright color scheme to "mimic the appearance of sportswear and the emerging world of wearable technologies," per NASA's description."

Those wearable technologies are going to be old technologies from the past in the year 2030. The same with the appearance of today's sportswear fashion. :D What a bad idea!

Hollywood will be happy. Futuristic space suits always seem to have a lot of clear material (and lights pointed inward), so the audience can see high-priced stars in simulated space settings.
Reply  |  Post Message  |  Messages List  |  Start a Board
InformationWeek Is Getting an Upgrade!