SEARCH
A minimum of 3 characters are required to be typed in the search bar in order to perform a search.
Announcements
Event
Enterprise Connect 9/27-9/29 - Time is running out, secure your FREE Virtual Pass today!
PreviousNext
Open Government
Commentary

New York As IT Center Of The World

The Big Apple's new licensing agreement with Microsoft is just one part of an ambitious IT strategy that includes data center consolidation and central management of policies and services.
John Foley
Editor, InformationWeek
October 26, 2010
New York Mayor Michael Bloomberg last week unveiled a sweeping new IT strategy that entails consolidating the city's tech infrastructure, centralized IT planning, and a new license agreement with Microsoft. New York City is quickly transforming from a fragmented, inefficient IT approach into one that could become a model for other major cities.

Bloomberg, along with deputy mayor Stephen Goldsmith and commissioner of IT Carole Post, announced the overhaul in a City Hall press conference attended by Microsoft CEO Steve Ballmer. Surprisingly, the contract with Microsoft hasn't actually been signed yet, but it's reportedly worth $100 million over five years, which represents a savings of $50 million to the city.

How the city's number crunchers arrived at that savings estimate is a little unclear, but it includes money saved through renegotiated software licenses with Microsoft and an unspecified amount of "cost avoidance" associated with its adoption of cloud computing services.

The announcement was the latest in a series of steps taken since Post was named commissioner of the city's Department of IT and Telecommunications (DOITT) in January. In July, the city disclosed plans to consolidate IT infrastructure under DOITT, to upgrade the city's CityNet network, and to establish a platform for delivering mobile apps. The city estimates it will save $98 million under the plan, so the Microsoft deal gets it halfway there.

The new arrangement with Microsoft is a classic example of a major enterprise IT account using its leverage to renegotiate a hodge-podge of software licenses at big savings. New York is consolidating more than 40 licenses, along with support and maintenance, into a single enterprise agreement. In the process, it's ditching a single software stack for all of its PC users and replacing that with three package options – for occasional, regular, and power users. This way, the city doesn't pay for more software than needs.

The deal also introduces cloud services into the city's IT portfolio in a gradual way, one that seems appropriate for such a broad enterprise. The Microsoft deal covers 100,000 PCs (New York actually has two to three times that many employees), yet only 30,000 city workers will also get access to Microsoft's BPOS cloud-based apps. In addition, the city will be using Microsoft's Azure "platform as a service" to develop and introduce new apps, both for internal use and for the public. 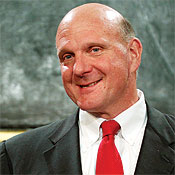 To facilitate all this, Bloomberg signed an executive order authorizing DOITT to coordinate IT planning and policy for the city. The Microsoft agreement, for example, covers 120 departments and agencies. Bloomberg described the agreement as "the first of its kind in the nation," and Ballmer said other local and state governments are looking to strike up similar agreements.

"We're thrilled," said Bloomberg. "We are becoming one of the IT centers of the world." He's right, of course. Immediately after the NYC-Microsoft event, I took the R train up to 34th Street to meet with Stephen Gillett, the CIO of Starbucks, who was announcing, in partnership with Yahoo, the Starbucks Digital Network at the Empire State Building. From there, I headed over to the Javits Center to attend the Interop New York conference and expo. (For more on New York as a high-tech center, see my story "New York Gets Googled.")

The one aspect of the deal I question is New York City's decision to use the same data center facilities as those used by Microsoft's business customers. When Los Angeles awarded a cloud contract to Google last year, the city required Google, as an added security measure, to offer its services from servers that were cordoned off from commercial customers. I'm surprised New York City didn't demand the same of Microsoft.

That said, the city's IT strategy is forging ahead. Earlier this year, New York City announced the winners of its first NYC BigApps competition, reached agreements to bring Wi-Fi to public parks, and began consolidating 50 data centers into one. Wi-Fi and cell service are coming to the subways next. No doubt, there's room for improvement in New York City's IT operations, but data center consolidation, new cloud-based apps, public Wi-Fi, and $50 million in savings are evidence that the Big Apple is moving in the right direction.

Developing a server growth strategy that works for both the business and the IT budget is an increasingly complex proposition. Should you splurge for virtualization-class servers and consolidate your data center? Or maintain the status quo and grow your server farm incrementally with entry-level devices? Download our report here (registration required).