SEARCH
A minimum of 3 characters are required to be typed in the search bar in order to perform a search.
Announcements
Report
Find out what you need to know so that you can plan your next career steps and maximize your salary.
Event
Explore strategies, new technologies, and best practices to provide a secure infrastructure - Learn more at Interop!
PreviousNext
Operating Systems
Commentary

5 Reasons Windows 8 Could Save Microsoft's Bacon

1 The bring-your-own-device trend has made it imperative to create an end user computing plan that encompasses multiple devices. That has meant adding support for iOS and Android, along with BlackBerry, not to mention the conventional desktop mix of Windows versions with a sprinkling of Mac OS and possibly Linux and thin clients.

If IT can reduce that burden by steering users down a unified Windows 8 path, they will. Note also that during the Windows Phone 8 launch, Microsoft said administrators will be able to manage the smartphone OS with the same tools they use to manage PCs. That's significant.

2 While there are clearly underlying differences among Windows 8, Windows 8 RT, and Windows Phone 8 from an application perspective, Microsoft has worked to make life easier for its developer community. No, x86 apps won't work on ARM devices--but for fairly obvious performance optimization reasons. However, when Microsoft rolled out Windows Phone 8, it also announced a new kernel that fits into what it calls the "shared Windows core," so that essential code is common across Windows 8 types, as is a shared set of APIs. Developers will have an easier time, but so will hardware ecosystem partners that want to create a shared set of drivers across platforms.

Microsoft also says that it will support native C and C++ code, which will make it easier to port to Windows Phone 8 and Windows 8 Android and iOS apps, as well as those nagging legacy applications. It will also make it easier for developers to use native open source libraries. 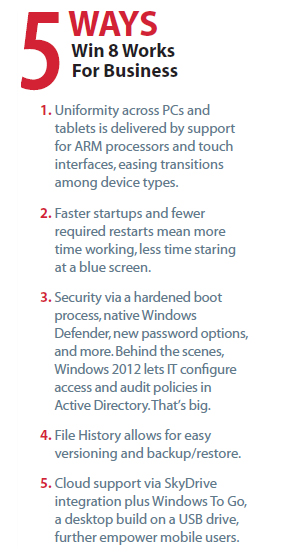 3 Microsoft's enterprise experience shines through with Win 8, especially with enhanced security and on the application side. As Mike Davis discusses in our security report, Windows 8 adds enhanced exploit mitigation, stronger sandboxing, and password management and encryption, just for starters. In other words, Microsoft, like a true enterprise-minded vendor, has baked in security from the get-go, not as an afterthought. And like other mobile industry players, Microsoft allows corporate-style apps in its Marketplace, and developers have to submit those for certification. Microsoft ensures that all apps in its Marketplace run well, and IT organizations get certificates to distribute to end users for access to those private applications. The downside of this approach: It has required the use of Windows Live ID, another point of administration. But with Win 8, those applications can exist anywhere: in Marketplace, on a Web server or private file server, or in the cloud. IT can distribute applications with, say, an email link. The key is that IT maintains deployment control. And with Windows Phone 8, Microsoft announced Company Hub, an app that IT can customize to incorporate only approved or corporate-developed Windows Phone 8 apps.

4 Microsoft's forthcoming Office 2013, with its heavy emphasis on the cloud, should fuel the movement toward device-independent computing. Heretofore, tablets and phones haven't been considered content-creation devices as much as content-consumption devices. Microsoft aims to change that. Touch-enabling Office is half of the equation; cloud access is the other. Combine the fact that Office is well entrenched in the enterprise and runs first on Windows with a trend toward integrated communication (seamless movement from email to calendar to presence to instant messaging to video, especially from within productivity applications), and it starts to make a lot of sense to stick with a single platform. Advances in Server 2012 help, too.

If Microsoft, with its proven management track record, can win IT's favor on the smartphone and tablet side, Win 8 devices could get a significant boost. In fact, in our survey, Windows Phone 8 jumps from the No. 4 position (behind iOS, BlackBerry, and Android) in 2012 to No. 2 in 2014, mainly at RIM's expense. It's clearly Redmond's game to lose.