The first Android phone from Dell weight less than four ounces with a 3.5-inch display, 5-megapixel camera and sells for $100 with a two-year AT&T service contract.
Antone Gonsalves
Contributor
August 24, 2010 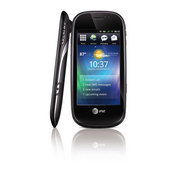 Dell Aero Smartphone
Dell has launched the U.S. version of the Aero, an Android-based smartphone that's selling for $100 with a two-year service contract from AT&T.

The Aero, first released late last year in China and Brazil, weighs less than four ounces, making the device one of the lightest Android smartphones, according to Dell. Other specs include a 3.5-inch display with a resolution of 640 x 360 pixels and a 5-megapixel camera with 8x zoom.

The smartphone, Dell's first Android phone, is only available on Dell's website. The device, launched Tuesday, costs $100 with an AT&T contract or $300 without one.

The Aero runs a customized version of Android 1.5, placing the smartphone behind many other Android phones. As of mid-June, half of all phones using the Google operating system were running Android 2.1, with the rest about evenly split between Android 1.6 and 1.5. Android 2.2 Froyo, announced in May, has yet to be distributed to end users in significant numbers.

The Aero comes pre-installed with mini-applications that provide access to the Flickr and Picasa photo-sharing sites, the YouTube video site and the Facebook social network. The smartphone also includes a global positioning system, Web browser and support for Adobe Flash Lite for mobile devices.

Other features include Wi-Fi access and Bluetooth. The handset comes with a stereo headset with microphone for listening to music and making calls, and a 2GB MicroSD memory card for storage.

In launching the Aero in the U.S., Dell is entering a crowded market, facing multiple makers of Android phones, such as Motorola, Samsung and HTC, as well as Research In Motion's BlackBerry and Apple's iPhone.

Android in the second quarter became the leading smartphone OS in the United States, toppling the BlackBerry OS, according to The NPD Group. Android was the OS on 33% of all smartphones sold to U.S. consumers, compared to 28% for the BlackBerry OS and 22% for iOS.