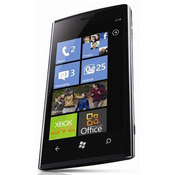 Dell Venue Pro
An Android-powered smartphone may soon be launched by computer maker Dell, on the heels of its recently unveiled Dell Venue Pro, which is based on Microsoft's Windows Phone 7 operating system.

Details on the device are sketchy, although some published reports said it will be a 4.1-inch WVGA AMOLED device, like the Venue Pro, which also has a slide-out QWERTY keyboard. The smartphone would resemble the Venue Pro but run on Google's Android OS, according to PC World. No release date for the device was given.

More on the Venue Pro, meanwhile, has been leaked on Amazon's United Kingdom website prior to its official launch. The unlocked, SIM-free smartphone will be available on Nov. 8 for £499 ($696 U.S.). Two weeks ago, when the handset made its debut at Microsoft's Windows Phone 7 event, the computer maker said the Venue Pro would be available during the holiday season through T-Mobile in the United States. Carriers in other countries were not specified.

The Dell Venue Pro will have mobile versions of Microsoft Office productivity software to give business users the ability to view, write, share, and sync documents. Users can also access SharePoint Workspace Mobile to collaborate with coworkers. The device also features an elliptical, slender, pocket-size shape, with gorilla glass for durability and scratch resistance. It is powered by a 1GHz Qualcomm 8250 Snapdragon processor and has 512MB RAM and 1GB ROM, along with 8GB of internal storage.

The Venue Pro also has a 5-megapixel camera with digital zoom and LED flash, GPS, Wi-Fi, Bluetooth and support for 3G, along with an accelerometer and digital compass. It also has social networking features to scan Windows Live and Facebook feeds and view photos, games, music, and videos. Users can also access apps from Windows Marketplace.

Other Dell mobile devices include the already launched the 5-inch Android-based Streak from AT&T, and a smartphone with a 3.5-inch touchscreen called either Mini 3i or Aero, depending on the country it is offered in.