Microsoft Is Not Killing Windows RT

Despite rumors to the contrary, Microsoft will unify its operating systems, not eliminate product lines.
Michael Endler
Associate Editor, InformationWeek.com
December 04, 2013
Credit: Microsoft is dropping the Windows RT branding, but don't expect it to drop the Windows RT vision. 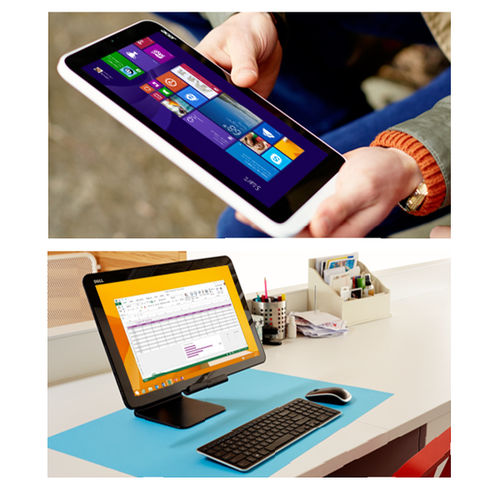 There's been a lot of buzz in recent weeks over the future of Windows, particularly the notion that Microsoft will kill off Windows RT. These claims are overhyped and built largely on semantics. Though Windows RT might not survive in name, you can expect it to remain a part of Microsoft's catalogue for the foreseeable future.

Microsoft devices and studios group leader Julie Larson-Green triggered the speculation when she said at last month's UBS Global Technology Summit that her company won't continue to support all three of its operating systems: Windows, Windows RT, and Windows Phone. Many interpreted this to mean that Microsoft's ARM-based devices (Windows Phone 8 smartphones and Windows RT 8.1 tablets) will soon share a single UI and app marketplace.

Such a progression makes sense; iOS and Google use the same platform for smartphones and tablets. With Windows Phone phablets becoming more popular, it's impractical for Microsoft to have one OS for six-inch screens and another for eight-inch ones. But a Windows Phone-Windows RT merger still isn't the same as terminating the Windows RT vision outright.

Even after the platforms have converged, Microsoft will support ARM-based tablets. They will still feature a Live Tile interface and run Modern-style apps, but they won't run legacy desktop software. For most intents and purposes, in other words, a Windows Phone-Windows RT merger won't force Microsoft to abandon much except the Windows RT brand -- which it has already done. The company refers to all 8.1 releases simply as "the new Windows," Windows RT 8.1 included, and it dropped the RT moniker from the Surface 2.

Yes, there will be substantial changes beyond product names. Windows RT doesn't support legacy desktop software, but it forces users into a desktop mode if they want to launch Microsoft Office. Future ARM-based Windows tablets will probably drop the desktop after touch-first versions of Office are ready. Excising the desktop certainly helps Windows RT become more like Windows Phone 8, but it's also a natural progression that's been anticipated since long before Larson-Green's recent remarks. Microsoft isn't killing products so much as refining them.

Even after Microsoft merges Windows Phone 8 and Windows RT into a single platform, Windows smartphones and tablets won't necessarily behave the same way. Apple's iOS behaves differently on iPads than on iPhones, for example, and Microsoft surely recognizes that users won't use Excel on a smartphone the same way they'd use it on a Surface-sized device.

These variations in user experience across similar form factors cut to the heart of the matter. That Microsoft will clean up its disjointed mobility plan goes without saying. How and when this effort will accelerate remains less clear -- and, with Microsoft playing from behind in the mobile arena, much more important.

Outgoing CEO Steve Ballmer has already described a future in which Microsoft applications and services such as Office and Bing move seamlessly with the user, translating via the cloud from one screen to the next. Future ARM-based Windows devices are part of this plan in that a Windows Phone-Windows RT merger would demand further unification of the code that runs various Windows platforms.

All current Windows operating systems, both ARM and x86-based, are built around the Windows NT core and share substantial portions of code. Microsoft has been candid about its desire to further unite its various platforms, both to facilitate the cross-platform experiences and to enable developers to deploy their apps throughout the Windows ecosystem without having to rewrite them for each individual OS.

Rumors suggest Microsoft will advance this agenda with a Windows Phone 8 update early next year. That said, ZDNet reported this week that major movement might wait until the spring of 2015, when the company is expected to release a wave of updates codenamed Threshold. This timeline could shift after Microsoft announces its next CEO. Regardless, it's not clear how quickly the company will launch a combined app store for smartphones and tablets, let alone a single OS for all ARM-based mobile devices.

Microsoft is making progress. IDC projects that Windows tablets will account for a respectable 10% of the market by 2017. But a 10% share will only partially compensate for the downturn in PC shipments expected over the same period, and it won't be enough to stave off consumerization trends, which will demand that IT become more and more adept at accommodating iOS and Android in the workplace.

Microsoft isn't going to kill its Windows RT vision, at least not in spirit. But to be more than a distant third option in the mobile race, it needs support from enterprises and consumers. A unified mobile OS is a good start, but it's only that -- a start. When and how Microsoft gets there are what counts.