Why Are We Still Buying Desktop OSes, Anyway?

Download the entire Sept. 24, 2012, issue of InformationWeek, distributed in an all-digital format as part of our Green Initiative
(Registration required.)

We will plant a tree for each of the first 5,000 downloads.

Recently, I begrudgingly gave in to a desktop OS upgrade on my personal laptop. Know what it bought me? Nothing. It didn't solve a problem. It didn't let me work better or faster. It merely "kept me up with the latest tech."

That's essentially what the return on investment will be when hundreds of thousands--perhaps millions--of enterprise desktops get upgraded to Windows 8. Surely we can figure out something better to do with all that money, even if we have to move some cheese in the process.

And that's where my inner finance child starts struggling with my tech self who's committed to keeping things rolling along. I see my staff and users happily and productively ensconced in the Windows world. I want them to be happy and productive, but I want to get rid of unnecessary ongoing expenses, too, even if it causes temporary pain.

How much money are we talking? For a midsize company with 5,000 desktops, between $2.5 million and $3.5 million. To get that number, I set some likely conditions around our investment scenario. As a practical matter, when companies move to a new desktop OS, they almost always invest in new hardware, too. Yes, Microsoft has assured us that Windows 8 will work fine on any PC that can run Windows 7. But organizational memory says that an OS-upgraded PC is a flaky PC. Don't mess with those battle-scarred IT veterans--it's out with the old, in with the new.

Conventional wisdom also holds that if you're going to touch the PC, you might as well give desktop users completely new workstations, probably with new monitors, as an apology for the hassle of learning a new user interface and other sundry inconveniences. Hardware is, after all, "cheap," and giving customers that virtual new-car smell is good IT PR. Assume that you can resell those retired workstations for about 20 or 30 cents on the dollar paid and that there's automation in place for deploying applications and user data.

With assumptions out of the way, let's talk money. Say that for $500 you can get a new system that can handle word processing and accessing your ERP application via various permutations of Web and (shudder) green screen. A 20-inch monitor costs $150 and 17-inch one $100. Consider whether you're going to make your desktop customers unhappy by giving them the smaller versions just to save $50.

Will you buy the $100 PC warranty? Many large shops do, but to be conservative, let's say that you pass. The cost of self-maintenance is probably more than $100 per workstation, but it's the same whether you replace the PC or not, so we'll leave that out. Assume that you're paying $20 per hour for either a deployment contract or labor, which is incredibly conservative if you consider the fully burdened cost (healthcare and other benefits) of an employee. Call it a conservative 30 minutes of time per fully automated deployment once you deal with the help desk calls and oddball scenarios your staff will be on the hook for. We'll consider staff time as a real cost.

Add it all up, and we're talking in the ballpark of $610 per Windows 8 workstation, assuming everything goes right. Your 5,000 desktops have cost the company a cool $2.55 million without monitors, and $3.05 million with them. Pretend that deployment labor doesn't exist, and you're still spending $2.5 million to $3 million. That's quite a nice-size project, budget-wise.

Now let's say that your boss just hired the Limor Fried of CFOs: young, very technology savvy, and a barracuda when it comes to what she does best--which is finance. When you're a finance barracuda, you're serious about keeping expenses low and return on investment high. So the first question she's going to ask is, "Why, exactly, do we need to do this? What's the benefit to the business, and what's the risk if we don't upgrade?"

That's exactly the conversation Microsoft doesn't want you to have.

No business prioritizes projects that don't deliver tangible value. Most will grudgingly OK projects to keep the wheels from falling off the car--but not if there's a contrarian questioning, rightly, whether you'd be smarter ditching the car and taking public transportation.

Your CFO may not be a tech-savvy barracuda, but someone in the C-suite eventually will (or should) ask what business value mass desktop OS change-outs actually deliver, whether the wheels are really about to fall off, and what the alternatives are given that 90% of your computer users don't do anything more taxing than browse the Web, write memos, work on spreadsheets, and use the ERP system. Do you really need a next-generation OS to do that? No. And if you as a CIO try to argue otherwise, you're risking your credibility.

So What's Your Alternative, Smarty-Pants?

I'll admit here and now that jumping off the OS upgrade treadmill is difficult. But you'd better have some suggestions on how to start weaning users from fat, expensive Wintel hardware, because someone will eventually demand an alternative plan.

The biggest bang for your buck will be gained by either installing a freely available Linux desktop operating system on existing hardware or, for some roles, dropping PCs altogether and going mobile.

There are several problems here. Linux will be a bombshell for your support staff, many of whom have no idea how to deal with the OS, although it's likely you're using system management and deployment tools, like Kace's KBOX, that support Linux desktops. End user acceptance also will be a problem, although probably less of one than you think given that today's all-digital and cloud-delivered options make Linux adoption more of a training and policy question.

Remember: End users want multimedia centers--they want to create spreadsheets and listen to music while they do so. Delivering on that is less of a problem nowadays because it's not about supporting hardware, like DVD drives, anymore. Even if Linux kills support for an optical drive on last year's crop of laptops, who cares? Media has largely moved online. Smartphone sync via USB to the workstation used to be a problem. Now we have widespread "over-the-air" sync. And mobile device management tools, like AirWatch and IronPort, that allow for app management, actually deliver value, unlike, say, a desktop OS replacement project. And, while proprietary video codecs with spotty OS support have been problematic in the past, that's not so much the case nowadays. Sites that don't offer HTML5 and Flash probably aren't sites that your organization cares about giving users access to. If you really need legacy Win32 support, thin clients or VDI are a good bet. Yes, desktop virtualization is a bridge technology at best, but if that's what it takes to wean your end users off fat desktops, it's worth considering.

If your company is moving to SaaS, private cloud, and Web-based ERP technologies, you don't need to be on the Microsoft and Apple desktop treadmills. All you need is a system with a reasonably up-to-date browser and the ability to push security updates. The problem is that many so-called "Web" ERP technologies actually require Microsoft-only plug-ins to run. Holy ActiveX '90s, Batman! But it appears that this problem is being solved as the lumbering wagons of ERP software production update their underlying Web technologies to be only 10 years old rather than 20.

Your software providers had better understand that it's not a Windows world anymore. If they plan to provide business value via mobility--and if they don't, the competition will--their apps need to run on Android and iOS. Win32 and Win64 aren't the future.

Before discussing Windows 8, regroup and have the difficult conversations about the value of operating system and PC upgrades. Look at this big expense and possible alternatives in terms of finance and business. You'll get some push-back, so enlist allies in finance and on the executive team. Swearing off Windows is a paradigm-buster to be sure. But get started. Figure out how much it will cost to evaluate your needs and create an action plan. 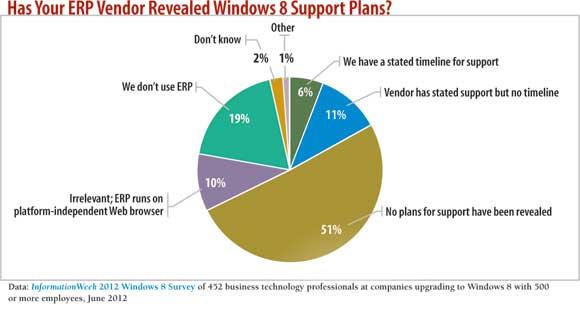