SEARCH
A minimum of 3 characters are required to be typed in the search bar in order to perform a search.
Announcements
Alert
Got some free time? Grow your knowledge from the comfort of your computer for FREE!
Alert
Are you looking to stay on top of IT trends? Check out our FREE webinars and virtual events!
Alert
Planning for 2023? Be sure to check out our upcoming in-person events!
Report
How does your salary stack up? 2022 IT Salary Survey Results Revealed
PreviousNext
Operating Systems
4 MIN READ
News

Windows: Goofs And Gaffes
(click image for larger view and for slideshow)
Microsoft this week introduces Windows 8 to consumers, but the operating system has been available to enterprises for the past couple of months through programs like Software Assurance and MSDN. InformationWeek sat down with Erwin Visser, senior director of Windows Commercial, in New York on Wednesday to find out how the rollout is proceeding, and what value businesses can expect from Windows 8.

InformationWeek: Microsoft recently made Windows 8 available to the enterprise. What's the early reaction?

IW: At this point, are companies using Windows 8 internally, or mostly for customer-facing applications?

Visser: For both. A major telco is rolling out tablets to their field engineers. This is to optimize the life of the engineer and get them an app that shows them the different projects they're working on.

IW: Many enterprises are still on Windows XP. Would you advise them to upgrade to Windows 7 or go straight to Windows 8?

Visser: What we say to customers at this moment is, first of all, migrate away from XP, that is priority one. Priority two is to continue the migration to Windows 7. A lot of customers are in that process, and bring in Windows 8 in those scenarios where it makes sense and it can immediately help. You can manage Windows 7 and Windows 8 side by side. We have some customers who are looking at the desktop, but their first interest is around mobility. 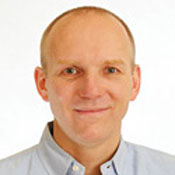 Visser: We've got Windows 8 tablets that deliver a no-compromise experience between the tablet and the PC. We've got great new hardware, with long battery life and new mobile apps either through the Windows Store or line of business apps. But at the same time it's compatible with what they have today. It can run Windows 7 apps and the peripherals they already have.

IW: What about from an IT management perspective?

Visser: You can manage these devices as if they are PCs. Anything you can do with a PC on Windows 7 you can do on a Windows 8 PC.

IW: But that only applies to Windows 8 and does not include Windows RT devices like Surface RT, which won't connect to Active Directory domains. Why is Windows RT out there on its own?

Visser: We made a different decision with RT. We optimized it for energy efficiency and the personal experience. It's preconfigured, certified hardware, that will offer very consistent quality over time. It's still compatible with the enterprise in the sense that it runs Office. And Windows 8 apps are compatible across both platforms.

IW: Critics say the new Metro interface will impose a heavy training burden on enterprises. How do you respond to that?

Visser: That's not the feedback that we're getting from our labs. We did usability tests with thousands and thousands of people. What we learned is that if you have novice users, and you give them a touch-based device, you have to show them you have to swipe the display from the edges [to bring up the Start and other menus]. And if you have a non-touch device with mouse, you have to go to the corners. When you give them those two tips, we see that people pick up Windows 8 relatively easy.

IW: What synergies exist between Windows 8 and Windows Server 2012 that will benefit enterprises?

Visser: The important scenarios for us are Direct Access, which provides the ability to give a Windows device secure access to corporate resources from any location, without having to start a VPN. It creates an encrypted tunnel. You can manage the endpoint as if it was inside your firewall. The second one is Branch Cache, which gives you the opportunity to cache information at the branch level, so you get a faster experience for PCs that are remote and it also saves bandwidth.

And VDI [Virtual Desktop Infrastructure] is another one. VDI was one of the key areas for innovation within the enterprise. And our goal was to make a hosted version of Windows 8 perform as close as possible to a local version.

IW: Microsoft has also talked about unifying the mobile experience. Are there synergies between Windows 8 and Windows Phone 8 that will help enterprise developers?

Visser: There is synergy in that more and more of the code between Windows 8 apps and Windows Phone apps will be compatible. You can use specific pieces of code between the two platforms. But with the phone form factor you have to present your content differently so there will be different trade-offs.

IW: One area of concern whenever Microsoft launches a new OS is compatibility. Are the ISVs ready for launch?

Visser: We are working with all our partners. There are different timelines for different ISVs. SAP has said all of their apps will be ready for Windows 8 in the next month's timeframe. So they're fast to market. Some ISVs are maybe a bit slower. That's no different for Windows 8 than it was for Windows 7.