Windows 8 Adoption Slows Ahead Of Windows 8.1

Windows 7 accounted for nearly half of all desktop users, at 46.43%, up from 45.63% in August. It gained users largely at the expense of second-place Windows XP, which will lose service in April. Microsoft's stalwart but long-in-tooth OS hung onto 31.41% of the market, down from 33.66% in August, and down substantially from 39.51% in January. Microsoft COO Kevin Turner said in September that 21% of Microsoft's commercial customers are still using XP, and that the company expects to reduce that number to 13% by April.

Windows 8 rose to 8.01% of the market, up from 7.41% in August. The 8.1% increase in market share represents one of Windows 8's worst month-over-month increases since launch, though precise calculations are difficult because Net Applications modified its methodology over the summer; the firm still derives data from Web traffic, tracking 160 million monthly visits to 40,000 websites, but recently stopped including "hidden pages," or pages that load but are never viewed by the user.

[ What will "One Microsoft" actually mean to customers? See Microsoft's Next Moves: 11 Takeaways. ]

To an extent, this outcome is somewhat predictable; many businesses leaving XP are better served at this point by Windows 7, which generally represents a simpler transition than Windows 8. But Windows 8 also failed to build on an ostensible surge last month. After accounting for only 5.40% in July, the OS jumped 37.2% to 7.41% in August, suggesting a strong September that never materialized.

Still, it's somewhat natural that Windows 8 adoption would slow just before the launch of a major update, as many would-be buyers are likely delaying purchases until Windows 8.1 hits the market. The Net Applications data supports this to a certain extent. Even though Windows 8.1 is still only available as a public preview, it nonetheless accounted for 0.87% of the market, up from 0.24% in August.

Indeed, if Windows 8.1 preview users are included in the overall Windows 8 total, then Windows 8 gained more users in August than Windows 7. 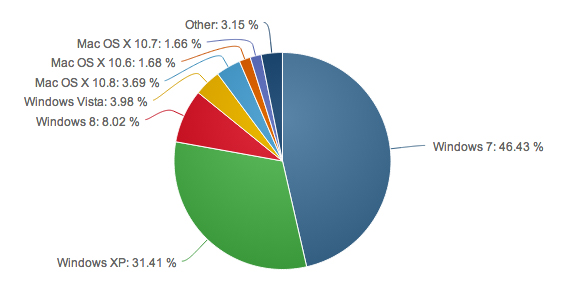 Windows 8.1 should help adoption of Microsoft's latest flagship OS. Unlike the current version, the update will allow users to boot directly to the desktop, bypassing the tablet-centric Live Tiles of the Modern UI. It will also include a Start button, albeit not one with the Start Menu from Windows 7.

These and other new features could make the OS more palatable to those who are leery of Win 8's departures from previous versions. But there's a risk for Microsoft in catering to longtime desktop users' demands: Users can now effectively shut off the Modern UI.

As Apple CEO Tim Cook is fond of saying, market share is less important than usage share. The iPhone, for example, trails Android in market share but dominates in metrics such as Web usage. This implies that iPhone users are more engaged with their devices than Android users are, and explains why iOS attracts more developers and generates more profit than all its competitors, despite having a lesser share of the market.

This applies to Windows 8.1 because it's possible for the OS's market share to increase even while interest in the Modern UI continues to flounder. If Windows 8.1 users spend much more time using legacy desktop applications than using Modern UI apps, developers have less incentive to develop for Microsoft's new platform. Given that this platform sits at the center of outgoing CEO Steve Ballmer's reorganization plan, this scenario has to be disconcerting to Microsoft.

However, Windows 8.1 should also help Microsoft make progress among tablet users, helping it to somewhat compensate for Win 8.1 desktop users who shut off the Modern UI. Gartner analyst Carolina Milanesi recently told InformationWeek that many businesses like Windows 8.1 laptop-tablet hybrids because they allow IT to deploy one device in place of two, for example.

Microsoft also recently profiled a number of schools and businesses that are now using its Surface tablets -- another sign of progress.

Still, with the PC market ailing and several studies indicating Windows tablets won't impede iPad adoption, Windows 8.1 is sure to be under the microscope from day one. Microsoft will release the update Oct. 18.