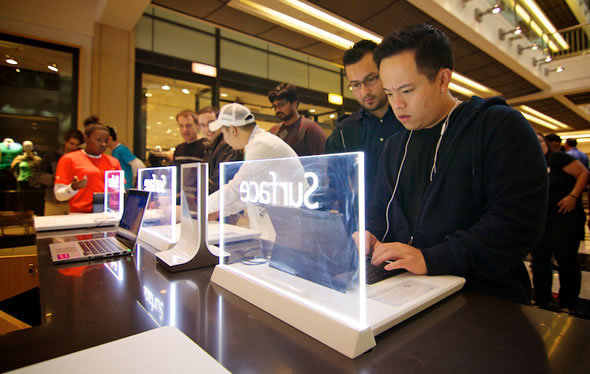 As part of its Windows 8 kickoff, Microsoft has opened more than 30 "pop-up" stores across the United States. Eschewing walls and confined spaces, these would-be retail hotspots are essentially mall kiosks on steroids. They're situated in the open, just like the fingernail accessory vendors and carts full of cellphone accessories or novelty license plate frames. But, with a large series of tabletops showing off the long-awaited Surface tablet, a team of attentive staffers engaging customers and a tower emblazoned with the company's logo, the Microsoft installations, to say the least, stand out from the crowd.

The stores, which are scheduled to remain open throughout the holidays, include a location at the San Francisco Centre in California. InformationWeek visited the store Friday, Oct. 26, during its first day of business. The experience was both predictably familiar and pleasantly surprising.

The traces of deja vu stemmed from the fact that Microsoft had already been cultivating a retail presence in the Bay Area prior to the new store's opening. Silicon Valley boasts full-fledged, rather than pop-up, sites in Palo Alto and Santa Clara, and a Corte Madera location -- in Marin County, just across the Golden Gate Bridge from San Francisco -- will open on November 3, complete with not only Surface and Windows 8 but also a performance by Kelly Clarkson.

The older stores' design cues, as others have pointed out, borrow heavily from Apple's successful model, and the San Francisco pop-up store, to a certain extent, follows suit. Each employee wears a bright, monochromatic t-shirt and a long lanyard with a simple name tag on the end, for example. An abundance of illuminated, semi-translucent signage is arranged in minimalist fashion. Devices are lined up without fuss in neat rows, enticing passersby to stop and pick them up.

But thanks to the kiosk-style setup, the new San Francisco location also gives off a fresh vibe. Spend some time people-watching at a mall and you'll likely see many shoppers who quicken their pace at the sight of a temporary mall vendor, their gazes fixed forward so as to avoid making eye contact with a beckoning salesperson. Microsoft's store is different; it manages to exude a sense of spectacle without compromising its elegant design. Attractive, prominently displayed gadgetry -- rather than unsolicited summons -- provoke interest from passing foot traffic. Interested shoppers are greeted by employees who are (or, at least, were on opening day) enthusiastic but not overbearing. It gives the impression of an event, not an obstacle.

Is it worth your time to check out one of Microsoft's pop-up stores? Will they help the Redmond, Wash.-based giant infiltrate the consumer space with Surface, or bring Windows 8 to both homes and businesses? Read on to learn for yourself.