SEARCH
A minimum of 3 characters are required to be typed in the search bar in order to perform a search.
Announcements
Report
Find out what you need to know so that you can plan your next career steps and maximize your salary.
Event
Explore strategies, new technologies, and best practices to provide a secure infrastructure - Learn more at Interop!
PreviousNext
Operating Systems
Commentary

Windows 8 Review: All About Touch

Microsoft's new OS offers the option of using a mouse and keyboard. But for most applications, it will have you touching, tapping and swiping.
Paul McDougall
Editor At Large, InformationWeek
October 26, 2012

Windows: Goofs And Gaffes
(click image for larger view and for slideshow)
Windows 8 was built for touch, and it's meant to be touched. Nay, it begs to be touched. I checked out the standard version of Microsoft's latest operating system, which debuted Friday, on Dell's new XPS 12, a slick, powerful convertible that uses Intel's robust and road-tested Ivy Bridge architecture. Here's what I found.

The XPS 12 and other convertibles give users the ability to easily switch back and forth between tablet and a clamshell/keyboard mode. Except for obvious applications like word processing, however, I didn't use the keyboard much. Windows 8's brightly colored Live Tiles invite touch and, despite some getting used to, I found it faster and more efficient to touch, tap and swipe my way around the system instead of clicking and clacking.

A good example is the options for switching back and for between the Metro interface and the standard, Windows desktop (which, despite complaints by some critics, is easy to access and very similar to the Windows 7 desktop).

[ Enterprises are using Microsoft's mobile-friendly OS to get closer to their customers. See Windows 8: CIOs Get Enterprise Road Warrior. ]

There are three ways to get from Metro to Windows Explorer. You can toggle back and forth with the Windows key, move the cursor to the bottom left of the display and click, or tap the Live Tile labeled "Desktop." Even when using the XPS 12 in clamshell mode, I invariably chose the latter. It just seemed more intuitive.

Touch also beat the trackpad for everything, every time.

Let's face it, whether at the bank, supermarket or airport check-in, touchscreens have become part of our daily lives. So our first instinct now when we see a touchscreen is to, well, touch it.

The downside of Metro (I'm still calling it Metro because most people know it as such, even though Microsoft has renamed it Modern UI) is that the home screen can get cluttered. There's only room for about 20 or so tiles and apps up front. You have to scroll horizontally to get to any more that you might have. There's an option to pinch everything down to Lilliputian size so it all fits on one screen, but then you'd need a magnifying glass. 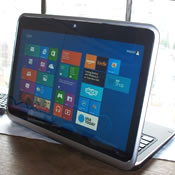 This isn't meant to be a full enterprise review of Windows 8. For that, you may want to see my colleague Kurt Marko's piece in our Windows 8 Survival Guide. But there are a couple of points worth mentioning that will be of interest to both consumers and business users.

The first thing you'll notice about a Windows 8 tablet or PC is how fast it boots. The XPS 12, running a powerful Intel Core i7 chip and carrying 8 GB of RAM, was fully on about eight seconds after a cold boot. Shutting down was even faster--about three seconds. Microsoft and its hardware partners have clearly fulfilled their promise to deliver the sort of on/off experience that we've come to expect from consumer appliances.

Users will also appreciate a built-in tool that allows them to restore their system to factory settings, just like you might do to a television if the color has gone wonky.

In addition to launching Windows 8 Friday, Microsoft also officially opened the online Windows Store, which is the sole source of Metro-style apps. The company hasn't released the number of apps currently available, but there are clearly hundreds, with hundreds more being added each day, according to Microsoft. All the big ones are there, including Netflix, Skype, Hulu Plus and numerous major news and sports outlets. And there's Angry Birds.

All in all, I think Microsoft, after numerous false starts with tablets and touchscreens, has nailed it with Windows 8, and this platform will give the iPad and Android runs for their money. But it's early days. Let the bug reports begin!