A majority of enterprises have upgrade plans for Windows 8, though it won't be available until next year. See what else IT pros have to say about Microsoft's "reimagined" operating system.
Paul McDougall
Editor At Large, InformationWeek
October 31, 2011 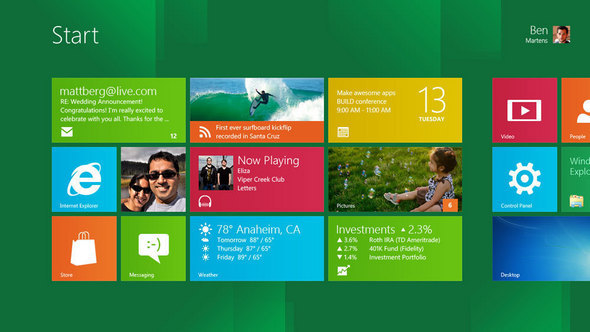 Although Windows 8 likely will not be released until sometime in 2012, a majority of enterprises already have developed upgrade plans, according to an InformationWeek survey of 973 business IT professionals.

The next version of Microsoft's venerable OS contains a number of features that are already drawing considerable interest. Most notably, Windows 8 features, in the words of Windows division president Steven Sinofsky, a "reimagined" interface that borrows the Metro GUI from the Windows Phone 7 platform.

Metro is based around what Microsoft calls Live Tiles, blocks of on-screen real estate that serve up live information from email, messaging services, social media platforms, and other sources of content and data, depending on the user's preference. Windows 8 will also include a direct link to an applications store, a feature that will make the OS seem even more smartphone like in its design and utilization.

With Live Tiles, it is no secret that Redmond built Windows 8 with tablets in mind. For the first time in its history, the company is forking the OS into two builds--one that runs on traditional desktops and laptops powered by x86 chips from AMD and Intel, and one that is designed to run on tablets that use processors based on ARM's system on a chip design.

The unique look and feel of Windows 8, which sets it apart from any previous version of Windows, may be why, even at this early stage, more than half of 973 business IT pros polled in InformationWeek's survey said their organizations already had plans to implement Windows 8 at some point. Click through to the next slides to see other surprising results from our Windows 8 survey. You can also download a full copy of the Windows 8 research report (free registration required).