Microsoft pulled out all the stops to introduce its new mobile OS -- but will it be enough to tempt iOS and Android users?
Michael Endler
Associate Editor, InformationWeek.com
October 30, 2012 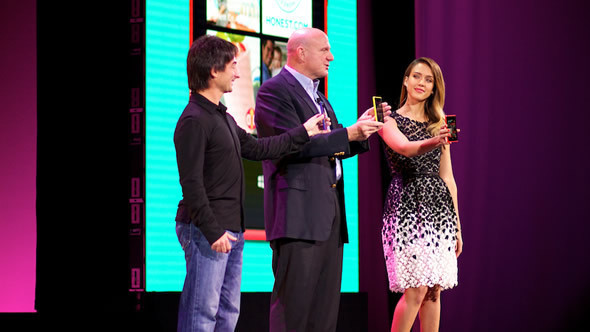 "Are there any Windows Phone fans in the room?" asked Jon Belfiore, Microsoft's manager for the Windows Phone program, as he took to the stage at the beginning of Monday's Windows Phone 8 (WP8) launch in San Francisco.

Evidently there were. The media-heavy crowd roared in approval, prompting Belfiore to respond, "Let's see those Windows phones." The audience grew louder as many complied, holding up their respective devices as Belfiore continued to work the crowd. "That's nice! That's nice!" he exclaimed.

Indeed, the enthusiasm didn't wane as the Microsoft phone chief went on to detail the new OS's features, which include refinements to the tile-based UI already familiar to WP7 users, new versions of popular apps tailored for the new platform and intriguing tools for data management and parental control. Whether WP8 will appeal broadly will be borne out once phones are in users' hands, and once testers have seen whether the OS's novel twists are as powerful and intuitive as advertised. But with a palpable energy pervading the proceedings, many back in Redmond, Wash., were no doubt sharing Belfiore's sentiment--"nice!"

WP8 may be nice, but just as important, the presentation repeatedly emphasized, it is also different. "The state of the art has evolved much," Belfiore remarked. Apple, he said, standardized the contemporary smartphone experience: a visual UI arranged around a static grid of icons. Those in Cupertino will probably appreciate that he said Android "copied" the approach, but they'll probably take less kindly to the nonchalance with which he reduced Apple's attempts to advance the concept to "a fifth row of icons" in iOS 6.

"We wanted a different point of view," he said. "One that put people at the center of the experience."

This statement became the event's dominant theme; the potential to make your phone an extension of yourself and to use the device to grow closer to loved ones was reiterated at almost every turn. That Belfiore struck an interactive, conversational rapport with the audience was entirely appropriate to his message.

It wasn't just Belfiore who preached Microsoft's new attitude, either. Actress Jessica Alba -- a surprise guest who had early access to WP8 -- espoused the same message, and when CEO Steve Ballmer appeared unexpectedly to cap off the event, he summed up the new product as "the most personal" phone OS to date.

Devotees of other mobile platforms might argue that their devices are similarly open to such plaudits -- and they might have a point. But iOS and Android are now eminently familiar, with many upgrades coming in the form of incremental enhancements rather than revolutionary UI revisions. Though not obviously better or worse, WP8 looks nothing like its competitors. It, again, is different -- and that makes it eye-catching.

Built on same core as Windows 8, WP8 is also a field day for anyone who connects to other Microsoft services and products, a cornerstone of an ecosystem the company hopes to build as it expands its attention to include not only the traditional PC crowd but also mobile avenues. From Xbox connections to its new cloud service, SkyDrive, WP8 is intended to facilitate a seamless flow from one Windows-fueled device to the next.

And lest a closed system threaten the inclusive attitude that Belfiore promoted, WP8 also includes ways for users of other mobile platforms to connect as well.

Will the new OS make Microsoft a player in the mobile arena? Read on to see the features the company is banking on to do the trick.