The Palm Treo 700wx is smarter than earlier models, with more memory and better Microsoft Exchange support, while the BlackBerry Pearl is a skinny first for Research In Motion.

Smart phone are getting smarter. Palm last week introduced the first Windows Mobile-based Treo that comes bundled with the ability to automatically receive E-mail from Microsoft Exchange servers, and Research In Motion came out with a slick new BlackBerry, the Pearl, a distinct transition from its larger PDA-like design. 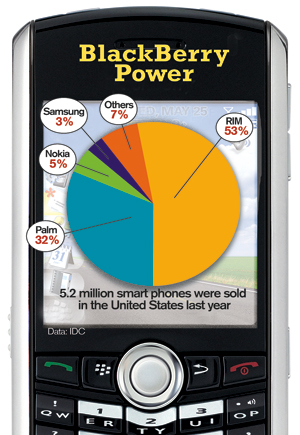 The new smart phones are designed to give mobile professionals a single lightweight device for E-mail, Web browsing, even access to business software, plus all the features of a cell phone. Sales of PDAs without phone capabilities have plummeted in recent months, according to IDC, suggesting that the smart phone eventually will dominate the business-class mobile device market.

Palm's new Treo 700wx, available only through a Sprint wireless subscription, is an improved version of the Windows-based Treo 700w, available only through Verizon Wireless. The 700wx comes with 64 Mbytes of memory for running software apps--twice as much as the Treo 700w. Palm says the extra memory solves a memory leak problem in the Treo 700w, reported by Personal Tech Pipeline in March, which requires users to occasionally reset the device to run apps (see "Second Thoughts: Palm Treo 700w").

The Treo 700wx is Palm's first model to support Microsoft's Direct Push technology out of the box (Treo 700w users can download an upgrade to Direct Push). That means users don't have to schedule their Treos to sync with an Exchange server to pull their messages; they get them automatically. RIM also offers push E-mail for BlackBerrys, but that requires purchasing its middleware. Palm and Microsoft want to convince businesses with Exchange servers that Windows Mobile Treos are a better deal.

Trinity Valley Electric Cooperative bought Treo 650 smart phones running the Palm OS for its staff last year after they beat BlackBerrys in a comparison test. The company also plans to purchase Treo 700w phones. Some employees want to continue using Palm OS Treos, and the Good Technology push E-mail service in which Trinity Valley already has invested works with both the Palm OS and Windows Mobile platforms. "If I had to do it over again, I would jump right in" using Direct Push, IS manager Ian Fleming says.

Best Bet?
Palm's strategy is based around consumer choice. It plans to support the current Palm OS through 2009 while its developer, PalmSource, transitions the operating system to Linux, conceivably to expand opportunities for mobile app development. Palm sees Windows Mobile as its best bet in the business market because it ties in to servers and applications. But the BlackBerry has a considerable lead, accounting for more than half of all smart phones sold in the United States last year.

Meanwhile, Palm warned last week that its first-quarter revenue would miss an earlier forecast, saying it sold fewer Treos than anticipated. The company said revenue will come in at $354 million to $356 million, compared with the $380 million to $385 million it forecast in June, the company said.

In smart phones, form factor is just as important as features. RIM's new Pearl includes 64 Mbytes of flash memory, a digital camera, a multimedia player with a stereo headset jack for music files, and an expandable memory slot--a BlackBerry first. (Both Palm and RIM have made the point--whether or not IT managers approve--that users want one device for both work and play.) The cell phone-like Pearl weighs just 3.1 ounces, making it RIM's smallest BlackBerry. It supports up to 10 E-mail accounts and instant messaging clients from AOL, MSN, and Yahoo, plus BlackBerry Maps software. Pearl is available exclusively through T-Mobile.

2021 State of ITOps and SecOps ReportIn this report from InformationWeek, we explore what we've learned over the past year, critical trends around ITOps and SecOps, and where leaders are focusing their time and efforts to support a growing digital economy. Download it today!
Download This Issue!