Cloud, mobility, and consumerization are stressing corporate IT. We surveyed 551 business technology pros to see how they plan to shine.
Jonathan Feldman
CIO, City of Asheville, NC
March 24, 2011
Think you can hold the line against the forces pressuring the corporate desktop as we know it? Maybe, if you're in an very security-conscious or heavily regulated company. But the better question is: Should you?

The InformationWeek Analytics 2011 End User Device Management Survey of 551 business technology professionals shows that the device landscape has, in some ways, changed tremendously since 2009, when we last surveyed our readership on how they equip their companies' employees. The Android and tablets are now on everyone's radar, and virtual desktop infrastructure is making gains. But some things have stubbornly remained the same: 51% of us still equip the majority of our users with fat desktops; laptops and smartphones follow in popularity. We're still trapped on a three-year replacement cycle treadmill. And 24% are still tied to expensive PC leasing arrangements.

In 2009, we predicted that native desktop applications would become less important, and we got that one right. In our 2010 InformationWeek Analytics SaaS Survey, 47% of respondents were using software as a service. In our April 2011 survey, 60% said they were using applications in the cloud, up 13 points in a year--an impressive jump for a technology category largely viewed with suspicion by IT.

Moreover, mobility continues to transform the nature of work. In 2009, 64% of respondents said screen size was a major barrier to smartphone use, but in our 2011 survey just 51% worried about screen real estate. We spoke with a large communications firm in North Carolina that's no longer issuing laptops to salespeople, because, frankly, speed trumps rich functionality. The company's portable computing platforms are now built on the new generation of tablets.

Consumerization? Well, we said that it was coming in our 2009 report and advised readers to prepare a risk/benefit analysis that clearly states the dangers and the costs of mitigation, as well as the upsides. As we discuss in our cover story, these include significantly lower gear prices due to manufacturing volume and commoditization. Yeah, there's going to be chaos, but there also will be chances to shine. If you like the idea of experimenting with rapidly evolving, low-cost technologies and techniques, you've come to the right decade. Take VDI: In 2009, just 18% had adopted or were considering it. Now, that number is up nine points, to 27%. This year, we asked for the first time about tablet use, and 15% say they see no barriers. We'll bet that by next year, that number also will jump significantly.

The ultimate purpose of IT is to innovate to improve how business gets done--whether faster, cheaper, or smarter. Yet IT pros tend to think that their main job is to attain technology operational excellence. While operational excellence is great, it tends to encourage linear thinking: Keep doing X (say, change management) and you'll get Y (uptime). Fail to do X exactly the same way every time, and you might not get Y, and that would be bad. Except, if you keep doing the same thing all the time, by definition, there's no innovation. And if you're sticking with the same end user device choices that you offered 10 or 15 years ago, let us assure you that innovation just ain't happening--if for no other reason than you can't afford it. Exhibit A: 66% of respondents spend more than 10% of their IT operating budgets on end user devices; 23% spend more than 21%. In fact, the percentage of respondents who spend between 21% and 40% increased by four points from 2009 to 2011.

Where's the money to port your applications to tablets, or invest in comprehensive mobile device management? Here are some ways to free up funds:

>> Do you really need desktops? Terminals, for example, typically last six years or more, rather than the three or four years you'll get from PCs. Sure, smartphones and tablets will turn over faster, but they're also less pricey.

>> Start thinking "fleet management." If a business has vehicles that hardly ever get driven, they don't get replaced. IT has spent years creating management systems for desktops, but how many of us run utilization reports on PCs? In our experience, not many.

>> Update your application plans. Our research shows that smartphones have already outstripped cellphones (53% equip more than 10% of employees), and they're only going to get less expensive and thus more plentiful. Smart CIOs are already working to port relevant business applications; in our InformationWeek Analytics Application Mobilization Survey of 693 business technology professionals, fully 50% of respondents say they're willing to develop their own mobile applications. In fact, 25% say they're ready to develop mobile software that executes on the device itself--in other words, a client that uses the device's native language.

>> Get away from PC leasing. Yes, it's a hard habit to break. But let's be honest: We do it because we want to protect our spending on PCs. More than once we've heard, "I've got a contract; we can't stop now." Seriously? How about focusing more on agility than protecting your slice of the pie? Seven percent of respondents say they lease because operating funds are more plentiful than capital dollars--but a buck spent is a buck spent. If there's value in replacing 25% of your PCs every year, your company will continue to fund it. If there isn't value, it needs to stop.

One way to quantify value is via chargebacks--or, if not formal chargebacks, at least what's referred to as "showback." In our survey, we asked about both and came away with an interesting theory: Maybe one reason end user device expenditures as a percentage of IT budgets haven't gone down since 2009 is that over two-thirds of companies neither charge back nor engage in cost allocation. That means there's no incentive to reduce, or control in any way, the number of end user devices being deployed.

In 2009, we asked respondents to rate the likelihood they'd adopt the following policy by 2011: "Assuming an enterprise desktop suite, including enterprise applications, can be provided as a virtual machine, Web-based desktop, or other network-delivered package, most employees will be given a stipend to purchase whatever device they desire. " Just 17% said they'd be likely to go that route. But this year, just 35% define their general approach to consumer-centric new technology as strict or restrictive. Now, whether or not you buy the BYOD (bring your own device) model, there are always costs involved in adding endpoints to a network, whether it's wireless access point growth or additional application licenses. Fail to reflect these costs, and business units will add devices without thought. Interestingly, for those respondents saying they do cost allocations or chargebacks, we found that most of the time, expensive items like support staff, desktop management, network ports, and cost of server access aren't taken into account.

Could it be that IT is scared of appearing too expensive?

We also found that respondents are half as likely to treat end user device replacement simply as overhead in 2011 (24%) as in 2009, when 57% answered that way. Overall, we see unexplained overhead in IT becoming less and less acceptable. That's a good thing--we're big fans of IT transparency and would ask those who disagree: Who exactly does that overhead get charged to? Surely not IT. Our mission is to provide expertise and services for the company. We don't need a pile of PCs to do that. Maybe the devices are issued according to IT's strategy, but business units are the ones that require the PCs to process invoices, create airplane designs, and so on. So, while accountability can be uncomfortable, the truth can set us free--or at least provide impetus for change.

Putting the cost for PCs as "IT overhead" is totally missing the point, but even stranger is that 39% of our respondents don't calculate ROI at all. The excuse we generally hear is, if the business units are the ones using the PCs, they're really the only people who would understand how to calculate the return on investment. Our answer: Then you need to work with business units to understand how the devices are being used, how that use compares with alternative scenarios like VDI or SaaS, and how it translates into real cash flows.

IT isn't large and in charge anymore, but we still have influence. Cloud and consumerization have (hopefully) taught us that business technology decisions are negotiations rather than edicts. The end user device paradigm shift offers significant opportunities for business technology innovation, but you'll miss out if you're purely focusing on span of control and defensive IT. 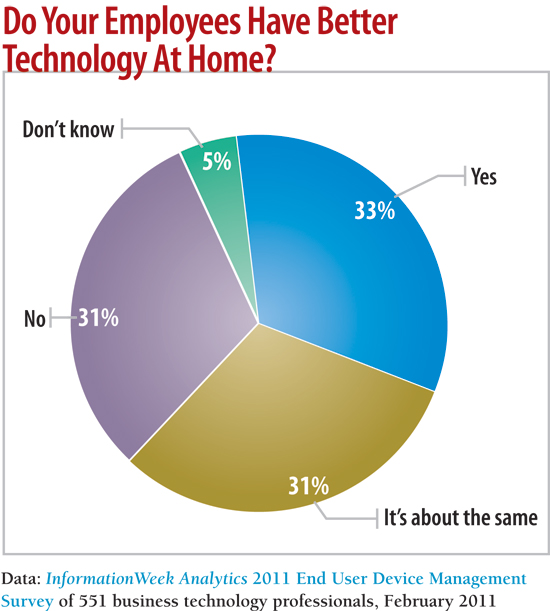