SEARCH
A minimum of 3 characters are required to be typed in the search bar in order to perform a search.
Announcements
Alert
Got some free time? Grow your knowledge from the comfort of your computer for FREE!
Alert
Are you looking to stay on top of IT trends? Check out our FREE webinars and virtual events!
Alert
Planning for 2023? Be sure to check out our upcoming in-person events!
Report
How does your salary stack up? 2022 IT Salary Survey Results Revealed
PreviousNext
PC & Servers
6 MIN READ
News

Some of the latest public safety apps offer to let you send texts, photos and even videos to 911 centers. There's just one problem: They don't work. According to the National Emergency Number Association, 911 centers still live in the telephone era, not the Internet and smart phone era.
Esther Shein
Contributor
November 29, 2012

If you tried to contact 911 using a public safety smart phone app during Hurricane Sandy and were unsuccessful, there's a good reason: Most of these apps don't work because many emergency call centers are not equipped to receive certain types of broadband communications. That's the message the National Emergency Number Association (NENA), wants to make people aware of as it promotes new guidelines for mobile application developers.

According to NENA, although there are several smart phone apps coming to market that are aimed at public safety and communications, and they "are developed with a high degree of creativity and innovation," they still "might not fully consider the impacts on 911 and public safety during the development process."

The Public Safety Considerations for Smartphone App Developers is a joint venture between NENA and the Association of Public Safety Communications Officials (APCO). The guidelines give developers information on the Enhanced 9-1-1 technical architecture, along with operational limitations that might influence the development of smart phone apps. 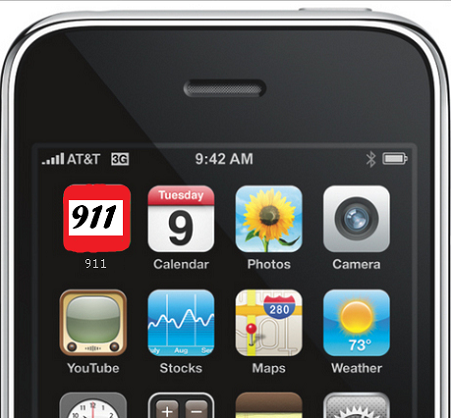 "If you pick up your smart phone or any other phone and use a native telephony app to dial 9-1-1, that should, assuming there is no outage, get you to 911," said Trey Forgety, director of government affairs at NENA. "What becomes an issue is when a developer tries to build an app that extends the functionality of 911 beyond the functionality it was engineered for." For example, said Forgety, NENA has seen apps that claim to send text messages, photos or video to 911 centers. "The problem is existing 911 systems have no ability to receive those kinds of data. They're part of the telephone age, not the Internet age."

He said a case in point was the attempted Times Square car bombing in 2010. The bombing was foiled because a citizen saw a suspicious parked van and called 9-1-1. "In that circumstance it could have aided the police, fire, bomb squad, etc., if the person was able to send a photo of the license plate, which could have been processed by automatic recognition systems," said Forgety. "And it would come up that this was a vehicle that had been flagged to be watched."

That's a prime example of the need to provide that capability in order to enhance the richness of the call, he adds. Another compelling reason would be if a caller needed to reach 911 from his cell phone during a medical emergency. "If I call up and am barely able to speak, it would be helpful if the call taker was able to retrieve from the database medical information like, 'I'm allergic to penicillin or have high blood pressure.' Having that ability to retrieve information saves time."

There are over 34 million Americans with speech or hearing disabilities and texting is their only or main way of accessing 911 services, according to NENA CEO Brian Fontes.

Given that there are over 331 million wireless connections in the U.S. today, "We are now past the majority of these wireless devices being smart phones, and that number is growing exponentially," Fontes said. Users are increasingly moving away from voice as these broadband connections grow: Only one third of the traffic traveling over wireless networks is voice communications; two thirds is data, with people sending texts, videos and pictures.

Yet, the technology is not keeping up with the times -- much of it is about 40 years old and primarily voice-centric communications. "In today's world most people communicate in a non-voice context," said Fontes, "so it's essential our 911 systems keep pace with 21st century technology to be able to receive information in the way sender is sending it."

According to the guidelines, an improved, IP-based 911 communications system has been designed and is beginning to be implemented in some areas across the United States with the expectation that Canada will soon follow. Although the new "Next Generation 9-1-1 (NG9-1-1)" system has the capabilities to support voice, text, video, and additional data, many regulatory and funding factors are affecting how and when the new system will be available on a large scale, according to NENA. "In addition, standards developed in the Wireless Carrier environment may affect the timing of certain types of text support. As a result, NG9-1-1 will likely take 8-10 years to evolve across most of the USA & Canada," said the organization.

Fontes said NENA is in talks with Apple, Google and other major mobile OS providers to discuss these issues. A spokeswoman for Skype said it is "not a replacement for a traditional phone and cannot be used for emergency calling."

Forgety added that most app developers don't consider the fact that some 911 centers, also referred to as public safety answering points (PSAPs), do not have broadband data service at all or they are "severely limited" in data services available to their employees. There are examples of cases where app developers didn't understand a call taker would not be able to do something as basic as visit a website to enter a code, said Forgety, because they are restricted from using a browser at their work station inside a 911 call center. Some of those centers are located in police or fire stations. Others are standalone centers, he said.

The hope is that developers pay close attention to the guidelines because "most of the apps we're seeing now coming onto the market came on without any input from the public safety community," so they have no relevancy as to how 911 centers operate, Forgety said. "It's a great idea that [they] support public safety, but because these apps were designed without reference to the capabilities and limitations of 911 systems and were designed quite reasonably assuming that a 911 system works like the rest of connected world, they often don't take into account the limitations."

Given how the system works now, a very well-written VoIP app could, conceivably, connect a caller to 911. However, it would be very unlikely to convey accurate location information to the 911 system. Consequently, the call might not be routed to the correct 911 center, and even if it was, field responders such as police and fire fighters might not be able to find the caller in time.

Some apps purport to allow callers to send text, photos, or video to 911 centers. In an extremely limited set of cases, where the app developer has arranged in advance with one or more 911 centers, this could, perhaps, work. However, current-generation 911 systems do not have interfaces, procedures, or equipment to handle these types of data. App users should be very clear, up front, about where and when an app can extend 911 functions based on this type of pre-arranged scenario. When a user is outside an app's coverage area, users should be aware that using an app could delay or prevent responders from reaching them.