Acrobat XI will work better with cloud services and improve PDF support for phones and tablets, said Adobe Monday in announcing the next generation of its document creation and management tool.
Larry Seltzer
Contributor
September 28, 2012

Adobe on Monday announced the next generation of its document creation and management tool. Acrobat XI (or "11") focuses on integrating further with cloud services, and bridging what the company calls a productivity gap for information workers. It also improves PDF support on mobile devices.

Adobe said its aim is to curb the inefficiencies in document handling and management in organizations. The main stumbling blocks that cause these inefficiencies include continued use of paper documents and converting between document formats, but the company also cited security measures.

To make documents flow more smoothly between users, Acrobat 11 allows more extensive editing within the program and provides easier importing and exporting, now including export to Microsoft PowerPoint, as shown below. 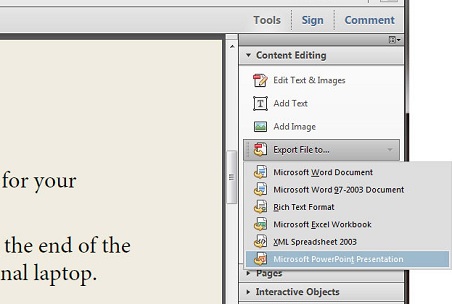 To make security a smoother process, it is now easier to lock and unlock PDFs and provide means of authentication for unlocking.

A new touch mode in Acrobat detects, in some configurations, that it is running in a touch environment, and adjusts the layout of the program to be more usable with a finger, generally by spacing out elements such as menus. Touch will work automatically on Windows 8 tablets, but it can be set as a user feature or by policy as an administrator. Adobe demonstrated the feature on an iPad running through Citrix Xenapp from a server. This arrangement allows IT to manage who gets access on which devices.

Version 11 integrates with Adobe's FormsCentral and EchoSign services, both added-cost services. With FormsCentral, Acrobat 11 provides forms creation, data collection, and analysis. The forms can be PDF- or Web-based. Using the FormsCentral service, users can distribute forms and collect results without having to allocate any company infrastructure for the task. EchoSign is a service that manages reader authentication and digital signatures in documents.

Adobe Reader is also updated for iPads and Android for annotation and commenting as well as form filling.