Take a closer look at Apple iTunes 11 and see how the venerable music application and e-commerce interface has been redesigned for the better.
Thomas Claburn
Editor at Large, Enterprise Mobility
November 30, 2012 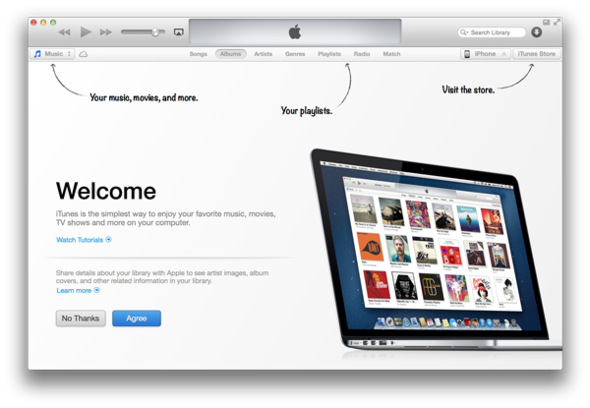 Originally scheduled for release last month, Apple's iTunes 11 is now available to OS X and Windows users through the OS X App Store or as a download from the company's website.

The venerable music app has lost its luster somewhat as cloud-based file synchronization has taken off. Now that Apple has iCloud, the synchronization component of iTunes seems unnecessary. But of course iTunes has become a source of revenue for Apple, so the company wants customers to be exposed to the iTunes Store whenever they feel the need to manage their iTunes content on their various devices.

Recent versions of iTunes have performed poorly, which some attribute to bloated code. If you've experienced the spinning beachball of death on a Mac, chances are iTunes was involved, particularly in the context of iOS device syncing.

Polling by social media analytics service Amplicate indicates that 59% of more than 115,000 social media voters expressed hate for iTunes. That's an almost worthless figure. It says nothing about how many of those iTunes haters have actually used iTunes. But let it suffice to confirm that more than a few Apple customers are dissatisfied with the software.

Beyond performance issues, iTunes is a pain because it's all but essential -- it's now integrated into OS X and it's hard to remove -- and because it too often limits what you can do with files -- it's a digital rights management (DRM) application, after all. Though Apple disavowed DRM for music/a> in 2009, it continues to support it for apps, ebooks, and iTunes video.

But the majority of iTunes users -- the silent, satisfied majority -- should find many welcome improvements in iTunes 11. The app looks more elegant and is laid out more sensibly. The simplified left-hand navigation panel is significantly more intuitive than old-style version, which housed links to the library, store, home sharing, genius recommendations and playlists.

Better still, iTunes 11 feels faster, even if the new version takes up more space (292 MB) than the old one (270 MB). Perhaps this has something to do with the excision of Apple's poorly received social music service Ping earlier this year.

Take a tour of iTunes 11 and see if it meets your approval.