iPad sales pushed Apple well ahead of Wintel giants like Hewlett-Packard and Dell in Q4, according to research.
Paul McDougall
Editor At Large, InformationWeek
January 31, 2012 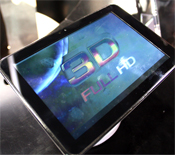 Tons of Tablets
(click image for larger view and for slideshow)
In the latest sign of how mobile devices like tablets are reshaping the personal computing landscape, new data shows that Apple has bested Wintel makers to take the top spot in the PC market if the iPad tablet is included in the count.

Apple shipped 20 million personal computing devices in the fourth quarter to claim 17% of the total market, according to analysts at Canalys. The numbers include about 15 million iPads and 5 million Macs.

That puts Apple ahead of former market leader Hewlett-Packard, whose efforts to introduce tablets based on its WebOS operating system last year flopped. HP's market share came in at 12.7%. Rounding out the top five were Lenovo, Dell, and Acer, with respective market shares of 11.2%%, 9.9%, and 9.3%.

Canalys' numbers show the extent to which tablets like the iPad, as well as new entries like Amazon's Kindle Fire and Barnes & Noble's Nook, are cannibalizing the traditional client market. The market grew 16% year-over-year in the fourth quarter when tablets are included in the data. Without tablets, the market actually contracted .4%, according to Canalys.

And while some observers have questioned lumping tablets with PCs, Canalys analyst Tim Coulling defended the methodology. "You have to look at the market holistically and consider that people are using tablets in much the same way as one might use a PC--for e-mailing, Web browsing, and other tasks," said Coulling, in an interview.

Canalys said HP in particular is at risk from consumers' growing preference for tablets in light of its WebOS debacle and subsequent return to the Windows camp. "Currently, HP is pursuing a Windows strategy for its pad portfolio, producing enterprise-focused products such as the recently launched Slate 2, until the launch of Windows 8," said Coulling, in a follow-up statement.

"However, questions remain over Microsoft's entry into the consumer pad space. While early demonstrations of the Windows 8 operating system seem promising, Microsoft must focus its efforts on creating an intuitive user experience that is far less resource intensive," said Coulling.

The analyst said recently launched Ultrabooks, which rely on Intel's low-power CULV processors, aren't likely to put much of a dent in tablet sales. "We expect Ultrabook volumes to see limited adoption through the first half of 2012, before finally gaining momentum later in the year as price points decline and Intel launches a new line of processors and embarks on an aggressive marketing campaign."

But Coulling believes that tablets will continue to pressure PC and notebook sales "in the short term," particularly with the launch of the iPad 3 approaching. Apple may introduce iPad 3 within the next few weeks, according to some reports. The company has not confirmed a launch date.