SEARCH
A minimum of 3 characters are required to be typed in the search bar in order to perform a search.
Announcements
Alert
Got some free time? Grow your knowledge from the comfort of your computer for FREE!
Alert
Are you looking to stay on top of IT trends? Check out our FREE webinars and virtual events!
Alert
Planning for 2023? Be sure to check out our upcoming in-person events!
Report
How does your salary stack up? 2022 IT Salary Survey Results Revealed
PreviousNext
PC & Servers
2 MIN READ
News

iBooks textbooks offer interactive learning for $15 or less, but hardware costs could hamper Apple's success.
Paul McDougall
Editor At Large, InformationWeek
January 19, 2012
Apple is ramping up its efforts to take a bigger bite of the $15 billion educational textbook market with the launch Thursday of interactive titles designed to run on the iPad tablet. 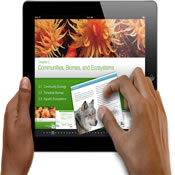 Most of the titles produced under its deals with educational publishers will sell for $14.99 or less, according to Apple.

Apple also introduced a tool, iBooks author, that Mac users can employ to create iBooks textbooks on their own.

Apple sees the educational computing market, long dominated by Microsoft, as a source of significant revenue and also as a way to expose its technologies to consumers at a young age. About 1.5 million iPads are already in use in schools and other educational settings, according to the company.

"iPad is rapidly being adopted by schools across the U.S. and around the world," said Philip Schiller, Apple's senior VP for worldwide marketing, who unveiled the new offerings at a launch event Thursday at New York City's Guggenheim museum, not far from the company's new superstore in Grand Central station. "Now with iBooks 2 for iPad, students have a more dynamic, engaging, and truly interactive way to read and learn, using the device they already love," said Schiller.

While the books that Apple showed looked good and should be more attractive to students than the dog-eared black-and-white tomes they're used to lugging about, questions remain about the cost of producing the titles and also the ability of school systems to afford to equip students with iPads, which start at $499 for an iPad 2.

"Much as with other printed content, textbook publishers will have to justify investment to add all this multimedia in Apple textbooks," said NPD analyst Ross Rubin in a tweet.

Still, Apple is confident that its electronic textbooks will catch on and could even save students money--and back strain--in the long run. "iBooks textbooks can be kept up to date, don't weigh down a backpack, and never have to be returned," the company said.

Today's technology should make it possible to engage students in new and unique ways, but tight budgets and aging infrastructure mean that's not always possible. In our Education's Technology Dilemma report, find out how two public school districts are using technology in innovative ways to close the gap between growing expectations and shrinking budgets. (Free registration required.)