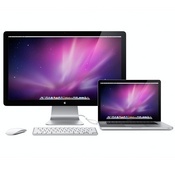 (click image for larger view)
Apple 27 Inch Cinema Display
For Mac fans looking for more screen real estate, Apple on Friday released the pricey 27-inch Cinema Display. Apple first introduced the new monitor in July, along with a refresh of the iMac desktops and Mac Pro workstation. The new Cinema Display sells for $999. Orders from Apple's website ship in one to two weeks.

The new product has a resolution of 2560 x 1440 pixels and an LED backlight, which are the same specs for the display in the 27-inch iMac all-in-one system. The Cinema Display, however, is built to complement Apple's Mac notebooks. Among the notebook friendly features is Apple's MagSafe connector that powers and charges the laptop, which connects to the display via a Mini DisplayPort connector.

Other features of the Cinema Display include a 178-degree viewing angle, three powered USB 2.0 ports and built-in speakers and an iSight webcam with microphone. The display requires connected systems to run Mac OS X version 10.6.4 or later.

Apple charges a premium for its display. For example, the 24-inch version of the CinemaView, sold by Collins Machine & Tool Co., is available for $399. Collins doesn't offer a 27-inch model. The rival product has a resolution of 1920 x 1080 pixels, which is the same as the display that ships with Apple's 21.5-inch iMac. The CinemaView model connects to a Mac laptop via a Mini DisplayPort connector, but does not have a MagSafe connector.

In addition, the CinemaView does not have an LED backlight, which delivers better picture quality. The display also lacks a built-in camera, microphone and speakers. Collins introduced the CinemaView in April 2009, saying it planned to offer 19-, 21- and 24-inch versions. However, only the 24-inch model is available today.