SEARCH
A minimum of 3 characters are required to be typed in the search bar in order to perform a search.
Announcements
Alert
Got some free time? Grow your knowledge from the comfort of your computer for FREE!
Alert
Are you looking to stay on top of IT trends? Check out our FREE webinars and virtual events!
Alert
Planning for 2023? Be sure to check out our upcoming in-person events!
Report
How does your salary stack up? 2022 IT Salary Survey Results Revealed
PreviousNext
PC & Servers
7 MIN READ
News

Using mobile technology to arm mobile workers, services such as Exec, GigWalk, oDesk, and Uber, are changing the very nature of knowledge-based work. How will you cope?
Boonsri Dickinson
Associate Editor of BYTE
December 17, 2012

The workplace is set for a change too. What happens when you deploy thousands of mobile workers and pay them immediately after they complete a task? The next significant platform won't just let workers communicate and share links, but will potentially allow them to earn more money than they would if they were to work close to their homes. 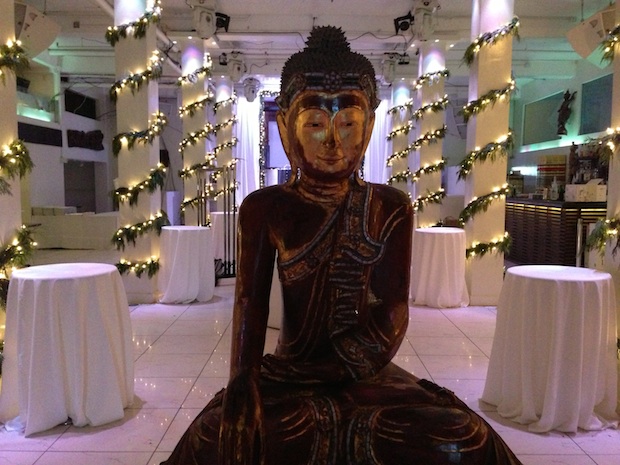 GigWalk is a startup based in San Francisco that is finding that many companies are eager to outsource tasks. For instance, Microsoft has signed a big deal with GigWalk to populate its Bing Maps with photos of 100,000 locations around the US.

To test out a task-based job, I signed up for a GigWalk with the potential to earn $5 for snapping a few photos. I walked two blocks to Temple Night club to complete the task. At first, it seemed like there were too many instructions, but I eventually figured them out.

The people were setting up for an event as I went in. I took two exterior shots and two interior shots. I thought taking the panoramic shot was difficult. I must have spun in circles for 10 minutes. I'm surprised they didn't kick me out.

I failed at the task that I signed up for because I didn't upload my photos within the allotted three hours. So if you want to sign up with GigWalk, make sure you have enough time for the mission, which is flexible depending on with one you select.

I went to visit Bob Bahramipour, founder and CEO of GigWalk at his office in San Francisco. The contractors at GigWalk use their own devices to enter into the job force. Businesses are hiring people for temporary work, and not necessarily for work that LinkedIn promotes — which Bahramipour describes as white-collar jobs. 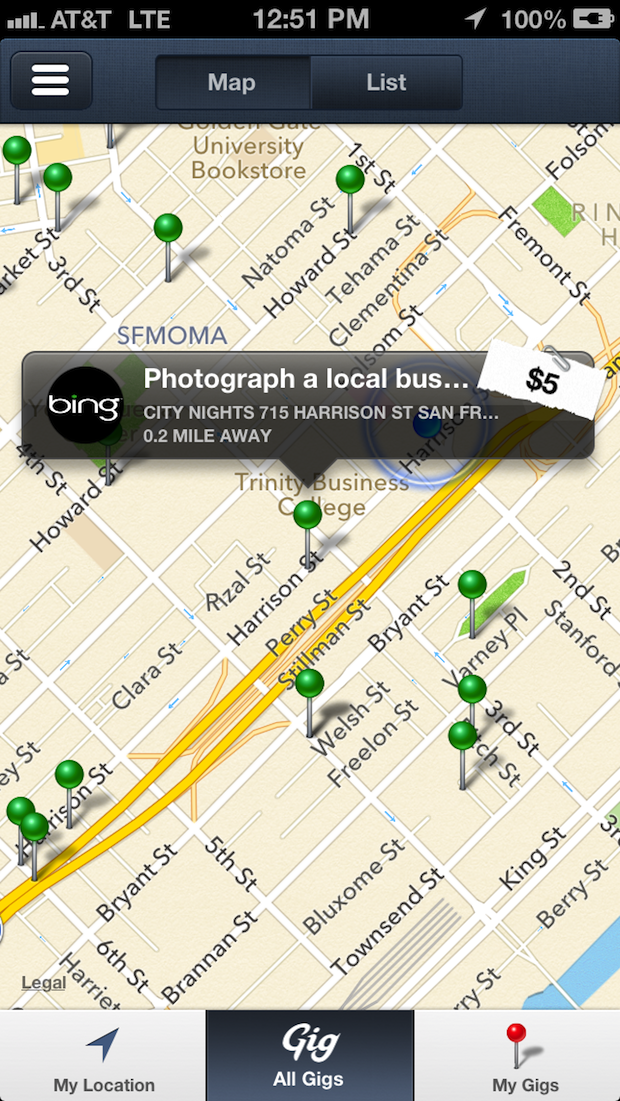 In the past, businesses had to hire thousands of people and give them a device or computer. But now that people generally have their own devices, it's easier to hire temporary workers. Some clients are using the GigWalk platform to hire people to go into stores to find out how products are placed onto shelves and to collect the data from the stores. In general, companies are using GigWalk to hire a workforce to do a job using the instruction on their handheld devices. By making a much more efficient investment in workers, companies are reducing capital costs and avoiding acquiring devices that would otherwise become obsolete.

Bahramipour also said the fact that all workers must check-in and complete their task, allows them to collect data on how well they performed. "It's the best way to solve the employee matching problem. Today on GigWalk, we can dissect the gig, feed it to an algorithm and, based on their past behavior, know what time they show up, and how long it takes them to complete a job," he said. This all adds up, and allows the workers to have a data centric profile, revealing if they are valuable or likely to not showing up.

In just the last year, GigWalk has collected more than 1 billion data points on the Gigwalk workforce in the field. Bahramipour thinks that his company probably knows more about its workers than anyone has ever known in the history of workforces.

"Through our mobile platform we have an unprecedented window into Gigwalkers out in the world; we can observe promptness, reliability, productivity rates, responsiveness, successes, failures, and demonstrated skills," Bahramipour said. "We believe workforce-in-the-cloud will be the dominant model in the future — both for high-skilled, permanent jobs as well as temp jobs. Mobility gives workers more flexibility than ever to choose when, how, and what they want to work on. For businesses, mobility means that companies can instantly hire, organize, and deploy any number of qualified workers in the field in any location without the overhead of maintaining a standing army."

Targeting the consumer market is a similar service called Exec. Distributed workers is the next big platform, said Justin Kan, co-founder of Exec. There are currently 300 Execs in the Exec network, which began in San Francisco and has expanded to other parts of the Bay Area.

"Everyone has these smartphones in their pockets. Exec and Gigwalk are on-demand labor forces. Previously, if you needed someone to do the work we are doing, you needed to hire them for a long period of time to make it work out economically. But now you can aggregate people's demand to make jobs for people. It's very futuristic. Paying for results can be good for the customer, but it means that people aren't making that much money. Our goal is to create a platform, allowing many people who can put jobs up and match them to people who can perform the jobs." Referring to the cleaning vertical, "the Execs come with supplies in-hand, making it easier for the customers. That's that intention."

Top categories that people use Exec labor for, Kan said, include pick up and delivery, cleaning, furniture assembly, moving, and research. Here's an example of what you can get an Exec to do:

Work Itself Is Changing

The very nature of work is changing due to the type of work that is in demand. Famous Internet security researcher Dan Kaminsky said "It's just complicated. Nonlinear in deep ways, which makes fair return on effort hard to compute. First there was a linear relationship between how many people worked and what you got. N field hands, n strawberries. Then there was an assembly line or distribution model. N builders and shippers and sellers, n cars. Now… it's messy. Work isn't dead. Flat work is dying. There's literally not enough work to go around and society doesn't know what to do about that."

Smartphone apps don't have to be games, chat, or news focused. They can be used for finding work, he added.

"We're living in a time where the nature of business itself has quickened — requiring ever more creativity and adaptability. Instead of bemoaning the talent battle, a new viewpoint on hiring talent is emerging where small companies and entrepreneurs are able to bring on people for shorter contracts and build a great relationship through the work itself," said Tom Chi, chief product officer at Mango Labs, a startup aimed at using smartphones to connect people with work.

"This provides tremendous flexibility for a new business, and helps them act on opportunities for growth and evaluate full-time hires. My organization has just released an app called Higher that brings down the time of hiring great contract talent from five weeks to five minutes. It's part of a growing trend where our devices will enable new modalities of work," Chi added.

But that doesn't mean you have to compromise security.

He calls this class of workers "nomadic workers."

"Moreover, all these new devices are insecure by default, and the security industry hasn't kept up. So we're witnessing a dramatic expansion of the threat surface, and threat landscape, combined with the wanton disregard of security best practices (endpoint software, network security visibility). It's all going to add up to some bad Code Red or Melissa Worm style stuff on mobile," he added.

But for those looking to make some extra cash, the barrier to entry is owning a mobile phone. The security issues are simply an after-thought when you have bills to pay.