AT&T, Verizon and other carriers use different ranges in the RF spectrum for LTE services. The recent deal between AT&T and Verizon illustrates the fragmentation of the LTE spectrum and the problems it creates for smooth operation of handsets.
Serdar Yegulalp
Contributor
January 27, 2013

What with all the recent news of telecom buyouts and mergers, here's one I never thought I'd see: AT&T just struck a deal for $1.9 billion worth of spectrum from Verizon.

The nitty-gritty of the deal involves Verizon selling several blocks of 700 MHz spectrum to both AT&T and Grain Management, a Florida private equity firm with many telecom investments. Verizon's been apparently trying to offload this portion of its spectrum, since the company has more suitable spectrum for its needs — which it picked up in a swap deal with a number of cable providers in the U.S. 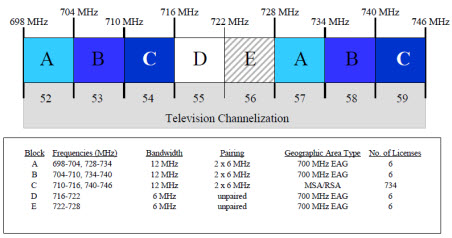 The lower 700 MHz spectrum band was formerly allocated to television channels 52 to 59. Those broadcasters were required to move to digital broadcasting on other spectrum and the lower 700 was auctioned off by the FCC.

AT&T, on the other hand, plans to use this 700 MHz spectrum for its LTE buildouts, which the company is planning to extend to some 250 million U.S. customers by the end of 2013, up from the 174 million AT&T currently has. The 4G LTE expansion project is expected to cost them some $8 billion through 2015.

Verizon is still in the lead as far as 4G LTE service goes, though, and plans to meet its target for 4G LTE buildout by the middle of this year. But AT&T is attempting to think a step ahead — it's also looking to create another LTE network on the WCS (Wireless Communications Services) band. WCS uses the 2.3Ghz portion of the spectrum recently approved by the FCC for such use, and may be ready for commercial use sometime in 2015 or so. AT&T filed to purchase spectrum in that range from Comcast, Horizon Wi-Com and NextWave Wireless Inc. earlier this year.

One possible issue in the short term is the fragmentation of spectrum that AT&T might experience if using both 700 MHz blocks and space in the 2.3Ghz zone. Fragmented spectrum makes for a small but measurable increase in the cost of smartphones. One report created by the GSM Association's research division Wireless Intelligence predicted that some thirty-eight different, non-contiguous slices of spectrum would be in use for LTE by 2015.

Some of this can be offset through advanced chip sets or antenna technology, but there's little doubt the best long-term strategy is for different carriers to have as many contiguous spectrum blocks as possible. Which, in turn, means that spectrum swaps and sales — and all their attendant intra-carrier wheeling and dealing — are guaranteed to become a major component of the way LTE networks are completed and built out over the next couple of years.

Out of all this, the biggest issue is for the industry is to create LTE standards that are globally compatible and don't require a lot of programming to ensure a given handset can find LTE spectrum wherever it goes or in whichever market it's deployed.