SEARCH
A minimum of 3 characters are required to be typed in the search bar in order to perform a search.
Announcements
Report
IT Enterprise Dashboard: This interactive data tool enables access to global research on IT budgets, business challenges
Event
Get in-depth insights & analysis from experts on all aspects of communications, collaboration, & networking technologies
Event
Data Center World is the leading global conference for data center facilities and IT infrastructure professionals.
Report
Find out what you need to know so that you can plan your next career steps and maximize your salary.
PreviousNext
PC & Servers
News

The company's Unified Computing System brings it into direct competition with some of its existing partners, such as HP, Dell, and IBM.
Charles Babcock
Editor at Large, Cloud
March 16, 2009 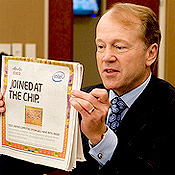 Cisco executive VP Rob Lloyd said Cisco could not resolve its customers' next set of problems if it "remained confined to the network." More details on the UCS B-Series blades and Unified Computing System will be coming in April, he said.

The overall hardware and software combination, the Unified Computing System, will attempt to overcome the silos that divide servers from storage, from the network and from each other. Working through BMC Software, Cisco will produce the Cisco UCS Manager, a graphical management interface that will be superimposed on the virtualized resources in each area.

It will support VMware, Citrix Systems, or Microsoft hypervisors as the source of virtual machines, and VMware CEO Paul Maritz and Bob Muglia, president of Microsoft's servers and tools business, were both on the Webcast speaking in support of the Cisco initiative.

IBM, HP, and others already do pieces of the integration that Cisco is talking about, and HP spokesmen said they can supply a unified computing system based on their existing blades and system management software.

EMC chairman Joe Tucci described the Unified Computing System "as a great initiative that is going to change the nature of the game." He described networking and storage as "first cousins" that ought to be brought into one family of devices.

Another partner, William Green, chairman and CEO of Accenture, said: "In the long term, this is about the competitiveness of IT and how you make IT productive in the long run."

Chambers repeatedly emphasized that Cisco will not try to produce all parts of the Unified Computing System itself. It's relying on software partners to produce products that fit into UCS, including VMware; Microsoft; SAP; BMC, the systems management supplier in Houston; and Savvis Communications, an IP networking service supplier.


InformationWeek Analytics has published an independent analysis of the challenges around virtualization management. Download the report here (registration required).