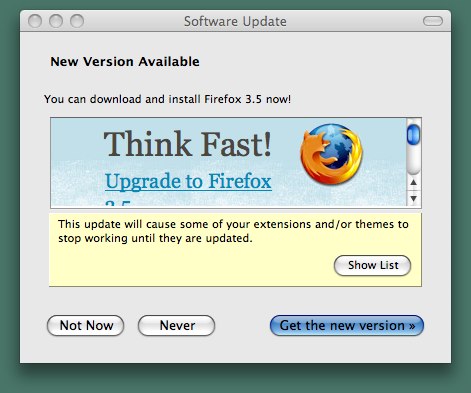 Another intriguing new feature: Location-aware browsing. The tool uses your system's built-in geolocation hardware - that's assuming your system has that of course - to allow you to share your location with other people. You can set it to share your pinpoint location, or just your general. Geolocation support will open the door to location-aware Web applications.

Firefox 3.5 faces new browser challengers. While Internet Explorer's market share has slipped fast, by 8% percentage points to 65.5% in the past year, Google Chrome, Apple Safari, and the venerable Opera browser are all emerging as contenders to Firefox - alternatives to the alternative, so to speak.


Firefox has gained about 3 percentage points to 22.5 percent in market share, according to Net Applications' statistics since July 2008, and Firefox backer Mozilla doubtless hopes for more gains with the release of Firefox 3.5 planned for Tuesday. But Apple's Safari and Google's Chrome each gained 2 percentage points, to 8.4 percent and 1.8 percent, respectively, indicating a growing appetite for alternatives to Internet Explorer that's not completely met by Firefox. Opera stayed flat at about 0.7 percent.

In short, Firefox isn't the only scrappy underdog in town, and Firefox fans' easy us-versus-them polarization is transforming into a more complicated multilateral equation.

Now if you'll excuse me, I think I'll go upgrade.