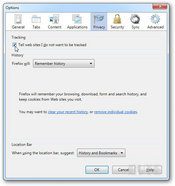 (click image for larger view)
Firefox 5.0 Simplifies Privacy
If you're a fan of Mozilla's Firefox, the popular alternative Web browser to Internet Explorer, take note of a new version that became available this week. While Firefox 5 does not represent not a huge user interface upgrade compared to version 4, some interesting changes lurk under the hood.

Consider these five reasons why you may want to upgrade to Firefox 5.

Extra support for CSS animations makes it possible to animate transitions from one CSS style configuration to another. The advantage to this is it's simpler than traditional script-driven animation techniques. You don't have to know the JavaScript coding language. This rendering engine uses frame skipping and other techniques to keep animation support as smooth as possible. This is definitely a plus for newer Web page developers who want to run unique CSS animations and are just getting started.

2. Easier to find Do Not Track button.

3. The latest version is more stable.

Through strenuous testing, I found this release to be much more stable than previous versions--as one would expect. I tested out visiting various sites that would sometimes crash in previous versions. Also, I am one who usually has multiple tabs open at the same time. In my experience, this almost inevitably ended up in a crash of Firefox at some point during the day, especially with multiple tabs open and trying to navigate through complex sites quickly.

The latest iteration of Firefox includes better support for devices running Android. It's compatible with any device running Android 2.0 or higher. Expect a 17-MB install internally or on an SD card, with 512 MB of RAM in the device required. I tested Firefox 5 out on the Samsung Galaxy 7" Tablet, and was pleased with its performance and UI ease of use. This is a definite plus for users of Android phones and tablets. It's easy to install and use and can be downloaded through the Android Market.

Most people know that Firefox likes to be a hog with your system resources. While putting the screws to it on my Windows 7 system, I went into Task Manager and found it was actually using fewer resources than previous versions. This is a definite bonus for those people who love Firefox or loved it in the past, but gave up on it for a leaner browser like Google Chrome.

I tested Firefox 5.0 on Windows 7, Android 2.2, and the latest release of Mac OS X. Overall I was impressed with improved response and better security. Unfortunately, some of your add-ons won't work right away with the new version, but just give each developer a few days, then look for updates.

Brian Burgess is BYTE's executive editor. A BYTE technologist, he leads our How To section. Follow him on Twitter: @mysticgeek. Got an idea? Send it to Brian at [email protected].

InformationWeek Analytics is conducting a survey examining the struggles IT faces in managing content, and whether enterprise content management products make a difference. Respond to the survey and be eligible to win an iPod Touch. Take the survey now. Survey ends June 24.