SEARCH
A minimum of 3 characters are required to be typed in the search bar in order to perform a search.
Announcements
Alert
Got some free time? Grow your knowledge from the comfort of your computer for FREE!
Alert
Are you looking to stay on top of IT trends? Check out our FREE webinars and virtual events!
Alert
Planning for 2023? Be sure to check out our upcoming in-person events!
Report
How does your salary stack up? 2022 IT Salary Survey Results Revealed
PreviousNext
PC & Servers
2 MIN READ
News

The new Nexus 4 phone and Nexus 7 and Nexus 10 tablets keep the competition fierce in the tablet world. Google claims the Nexus 10 tablet has "the highest resolution tablet on the planet," meaning higher than the Retina display in the iPad.
Serdar Yegulalp
Contributor
October 29, 2012

In an official blog post originally intended to be the substance of an event held in New York City today, Google made new across-the-board announcements for Android and its Nexus lineup of Android devices. The event was cancelled due to Hurricane Sandy.

Android 4.2: The latest rev of Android "Jelly Bean" is preloaded into the new Nexus devices. Among the new features in 4.2:

Nexus 4: The latest iteration of the Nexus smartphone, manufactured by LG, boasts a quad-core processor, a 4.7" display, and wireless charging. It's $299 for the 8GB model, $349 for the 16GB model. The latter will be offered through T-Mobile and other carriers with a new two-year contract. 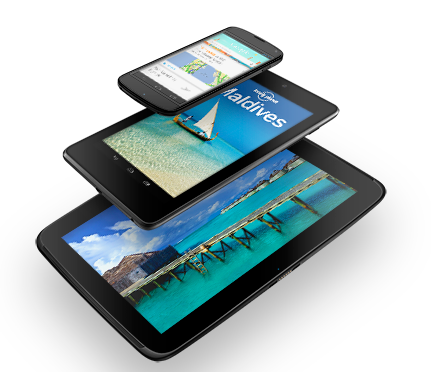 Google Now: Google's time- and location-based information organization app also got a boost, and now includes "flight information, restaurant reservations, hotel confirmations and shipping details" as well as "cards for nearby attractions, interesting photo spots, [and] movie times at nearby theaters or concerts by your favorite artists."

Google also announced the expansion of Google Play to more countries -- Canada, the United Kingdom, France, Spain and Australia, with all of the above plus Germany and Italy getting access to the music store on Google Play. More video content is also part of the deal, with the Twentieth Century Fox library of TV shows and movies being added to the mix.

Speculation abounded before the event as to whether the new revision of Android being announced would be a tweak to Jelly Bean or the vaunted next version of Android, code named Key Lime Pie. Given that all of the changes rumored to appear in KLP are now part of the 4.2 branch of Jelly Bean -- all of the rumored KLP devices, too, are simply Jelly Bean 4.2 devices -- it's not clear what KLP itself will bring to the table when it's announced for real.