SEARCH
A minimum of 3 characters are required to be typed in the search bar in order to perform a search.
Announcements
Report
Find out what you need to know so that you can plan your next career steps and maximize your salary.
Event
Explore strategies, new technologies, and best practices to provide a secure infrastructure - Learn more at Interop!
PreviousNext
PC & Servers
Commentary

Green Tech: A Work In Progress

Ecologically conscious technology is all the rage, but it walks a line between truly useful and merely for show.
Serdar Yegulalp
Contributor
April 20, 2012

Thursday night in New York at Pepcom's EcoFocus "green tech showcase" trade show, there was plenty of evidence that being green has become a desired feather in the cap of many technology companies. That's never a bad thing, but it leaves a bigger question unanswered: what's really green, and what's just showing off?

The most unambiguously green companies I saw were involved directly in efforts to keep reclaimables out of the waste stream or to keep pressure on heavy polluters to clean up their acts. Among the former is Call2Recycle, which bills itself as "the only free rechargeable battery and cell phone collection program in North America." Call2Recycle sets up drop-off locations in many places, including major retailers such as Best Buy, for used batteries and cellphones. It costs nothing to set yourself up as a Call2Recycle drop-off location: C2R foots the bill for the collection materials, shipping, everything. In the same vein, Sprint was showcasing a number of LG phones built from 30% recycled plastics.

Then there were some things that looked intriguing, but still had a gimmicky flavor to them. Consider the nPower PEG, a device about the size of a collapsed umbrella. Casual motion--walking, riding in a car--causes a spring-and-magnet assembly inside the PEG to generate electricity, which is then stored in an on-board battery. The resulting power from the battery--about 500mA, 5V DC--can be used to power a fair range of personal gadgets when their own batteries run low. 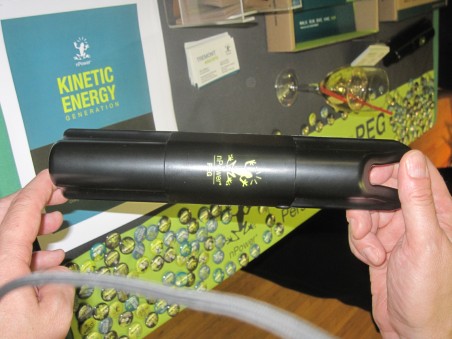 It's a good idea: backpackers, hikers, and the like will probably get the most out of it. But pitching it as a clean-energy solution seems misguided. The cost of the unit ($149 list), the amount of power generated, and the applications it can be put to all mean the amount of electricity being taken off the grid by using the device is trivial. Getting people to use it en masse, thereby making the savings non-trivial, would be tough. Granted, the company's looking into ways to make that happen; for instance, it's researching ways to build power-generating apparatuses into clothing. It makes sense, even if its current biggest sponsor for that research is the U.S. Army. (I shouldn't complain too much: no DARPA, no Internet, remember?)

Much of current green technology still requires an initial outlay--either in cash or a significant change in behavior--that causes people to balk. Consider Philips' LED light bulbs, also demonstrated at the show. Most of us ought to be familiar by now with LED bulbs as a replacement not only for incandescent bulbs, but compact fluorescent lighting as well. LED bulbs are easier to reclaim than CFLs and use about the same amount of power, maybe even less: 10 watts to produce the equivalent of a 60-watt incandescent bulb. Finally, LED bulbs are supposed to last at least a decade.

But LEDs are still pricey: Philips' bulbs list for $39.99 apiece. That means anyone who's replacing a slew of lights needs to make a large initial outlay, even after the rebates offered by local utilities. Contrast the cost to CFLs': Packs of eight 60-watt equivalent CFLs go for around $8 to $10 at my local hardware store.

Green tech for consumers still feels like it's in the conceptual stage, with good ideas that don't quite add up to the kind of change needed on a broad scale. Example: The keyboard on which I'm typing this is a Logitech K750--a solar-charged model. The fact that it charges by ambient light is less an ecological measure than one of convenience. It's nice that I don't have to swap batteries (or send those batteries into a landfill), but it won't add up to much if I don't also recycle the whole unit once that breaks.

The most glaring example of good intentions gone wrong manifested in the number of vendors at the show who offered their press kits on wood-encased flash drives. As a fashion statement or as a design aesthetic, a wood-sheathed USB drive is appealing; as any kind of ecological measure, it's flat-out silly. After all, no one thinks of a woodie station wagon as an "eco-conscious car". Do they?