Envy, SpectreOne, and refreshed Pavilion lines are designed to make the most of Microsoft's new operating system.
Paul McDougall
Editor At Large, InformationWeek
September 10, 2012
Hewlett-Packard, which has been slow to get behind Microsoft's new touch-friendly version of Windows, has finally signaled its support with the introduction Monday of a range of all-in-one systems geared for Windows 8.

The Envy 23 and 20 start at $999 and $799. Buyers can also add options like Intel Express Cache, which enables fast boot-up and application starts.

Also new from HP is the SpectreONE AiO PC, which sports an ultra-slim chassis and a 23.6-inch, full-glass HD display. The system comes with a wireless track pad that allows users to mimic touch gestures like swipe and tap. For gamers and multimedia enthusiasts, there's a 1-GB Nvidia graphics card, a total of five USB ports, and Beats Audio. 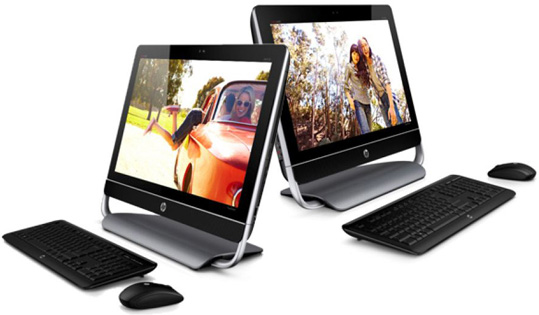 All In: HP backs Windows 8 with all-in-one systems like Envy.

HP is also refreshing its line of more budget-friendly Pavilion systems for Windows 8, which Microsoft plans for general release on Oct. 26.

The Pavilion 20 Ai0, starting at $499, is equipped with an HP TrueVision Web cam, and services like HP Connected Remote, Connected Photo, and Connected Music. It does not support touch.

The systems mark HP's first entries designed specifically for Windows 8, which hides the classic Windows desktop behind a touch interface that Microsoft developed under the name Metro. As on Windows Phone, Metro dispenses with icons and instead gives users access to apps and information through Live Tiles, blocks of screen real-estate that feed live updates to the home screen.

HP has said it has no plans to produce a consumer tablet that runs Windows RT, the version of Windows 8 designed to run in systems powered by ARM-based chips, but it will eventually produce business tablets that run Windows 8 Professional.

The Envy and Pavilion systems are expected to go on sale in the U.S. in October, while the SpectreOne should hit stores in November.