Surface RT with 32 GB of storage will start at $499, without the keyboard/cover. This puts it directly up against the iPad in pricing, even though Windows RT does not run pre-Windows 8 software.
Max Cherney
Contributor
October 16, 2012

Today Microsoft Corp. announced the Surface RT tablet is now available for pre-order, a week and a half before its scheduled launch on October 26. 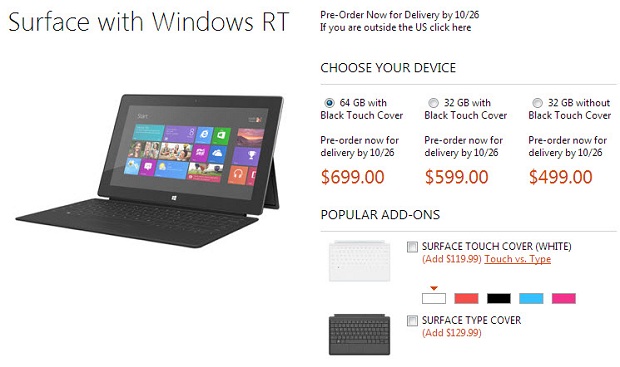 The new Surface with Windows RT starts at $499--the same as Apple latest iteration of the iPad--revealing Microsoft's intention to compete in the premium tablet market, where Apple current leads. But, Surface RT brings a few new features to the table.

Surface RT offers twice as much memory--32 GB--and a slightly larger screen, 10.6 inches on Surface RT versus 9.5 9.7 inches on iPad. Surface RT also comes with 2 GB of RAM, twice as much as on the iPad3. There is also a 64 GB option available for $699 with a Touch Cover.

The Touch Cover is another key feature. It's a $119.99 cover that doubles as flat panel keyboard with printed keys that don't depress when pushed. Microsoft also offers the Type Cover, a cover with a more traditional keyboard, for $129.99.

The device is powered by an NVidia quad-core T30 chip, and weighs 1.5 pounds, according to Microsoft.

The offering demonstrates a departure from past strategy. Microsoft doesn't typically manufacture hardware itself, rather producing the software to power machines made by others. According to the Wall Street Journal the company plans to produce the new tablet in similar quantities as Amazon's Kindle Fire and Google's Nexus 7.

Pre-orders are available in the U.S., Canada, Australia, China, France, Germany, Hong Kong, and the U.K.

The official release date for Surface is October 26, the same date as the Windows 8 launch.

The company also started showing TV ads for the Surface yesterday. Here's one of them:

Correction: An earlier version of this story said that the iPad display was 9.5 inches. Click here to return to the corrected sentence.