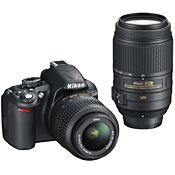 Nikon has introduced a refresh of its entry-level D-SLR camera, adding 1080p high-definition video recording and other features.

The D3100, unveiled Thursday, is the predecessor to the D3000 released about a year ago. The latest camera has a 14.2 megapixel CMOS sensor, a 3-inch rear LCD and an 11-point auto-focus system.

The CMOS sensor is new with the D3100 and is expected to produce higher picture quality. In addition, the camera offers continuous auto-focus during HD recording, which Nikon says is a first for D-SLR cameras.

Other new features in the D3100 include an image-processing engine called the Expeed 2. Nikon also has expanded the ISO range to as high as 12,800, which means pictures can be taken at lower light than the D3000.

Because the D3100 is an entry-level camera, Nikon has included a user guide that's easily accessed through a dial on the top of the camera. The documentation guides users through photographic techniques and configurations to achieve a particular look and feel in an image.

Professionals prefer D-SLR, or digital single-lens reflex, cameras, because they provide an accurate preview of framing almost to the moment of exposure. In addition, the cameras allow for the use of a variety of interchangeable lenses.

Nikon introduced the D3100 a couple of days after it unveiled two point-and-shoot cameras, the CoolPix S1100pj and CoolPix S5100. The former is a 14-megapixel camera and the latter 12 megapixels. Both come with a 5x zoom lens.