PC shipments are down 8%, according to Gartner, because more consumers are choosing tablets and smartphones. Only 87.5 million PCs were sold in the third quarter of 2012.
Boonsri Dickinson
Associate Editor of BYTE
October 11, 2012

PCs sales are down, probably because consumers are spending their money on tablets and smartphones instead. According to a Gartner preliminary report, only 87.5 million PCs were sold in the third quarter of 2012, which is 8% down from the third quarter in 2011.

Sales this time of year normally are driven by back-to-school shoppers, noted Gartner, but that wasn't the case this quarter. Acer and Toshiba especially suffered due to the poor consumer market. Even Apple saw a 6% decline. Lenovo was the only vendor to see an increase.

Here's what the U.S. PC shipment estimates look like: 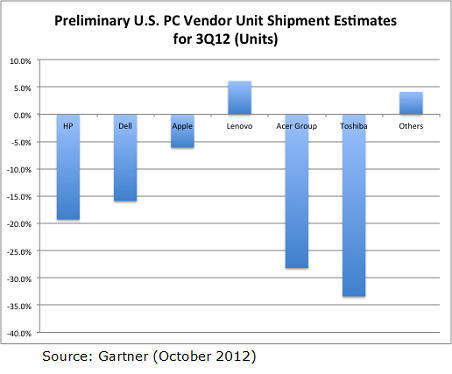 "The lack of appeal and innovation in PCs, combined with a challenging economic environment, led the consumer spend to move to other devices," Ranjit Atwal, research director at Gartner, said in a statment.