QWERTY Keyboards Are Here To Stay

Alternative keyboards are voodoo ergonomics. If the keyboard is going to be killed by anything, it'll be by the one holy grail of user interfaces: A direct neural connection between the user and the computer, with all of the fascinating and scary possibilities offered through such a system. The things I'm confident it's not going to be killed by are touchscreens — or, for that matter, other kinds of keyboards.
Serdar Yegulalp
Contributor
December 11, 2012

Apart from the floppy disk, has there been any one peripheral for the PC that more people have tried, and failed, to kill, than the keyboard? The floppy finally died thanks to networking-for-all and the USB flash drive, but, in my opinion, the QWERTY keyboard may be with us for another fifty years at this rate.

But this is not a complaint. Maybe the reason QWERTY and its cousins will still be around long after I'm gone is because it's far harder to improve on than we think.

The other day, I got in the Truly Ergonomic Keyboard — yes, that's its the name — one of the first new keyboards I've seen in a while that uses some mutated layout that the manufacturer claims will improve typing speed and accuracy. Right, because moving the Shift key a half an inch up to where the Tab or Caps Lock keys are, and sticking the Backspace and Tab keys in the middle, is clearly a massive improvement. (What would the term for such a thing be? "Voodoo ergonomics", perhaps?) 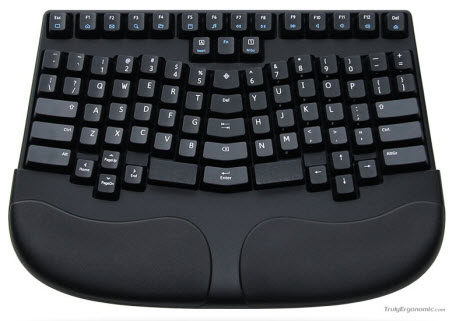 Yeah, I'm skeptical. The vaunted health benefits of an ergonomic keyboard seem to bulk very tiny compared to all the other things you could do. Get a good chair with a footrest; use proper sitting posture; take regular breaks from typing. If you ask me, it's easier — and overall, better — to develop those habits than it is to retain yourself on a device where the Enter key is where the spacebar normally is. Plus, the typing speed I can muster on a plain old QWERTY is nothing to sneeze at, anyway. I've tried retraining myself on an ergonomic board, and the increase in speed has either been negligible or not worth the hassle involved to retrain. If any of these devices really provided such a massive boost over a regular keyboard, the difference would be quickly self-evident.

The only people who hate QWERTY, from what I can tell, are Dvorak-layout fans and efficiency experts. Everyone else lives with it because it performs tolerably well, it's what they've always known, and because no real breakthrough has been made in input technology to unseat it yet.

The biggest reason such devices don't catch on is not just because they buck existing trends, but because they also provide no quantifiable improvement over what we already have.

Here's one example of a tangible improvement: the mouse versus the light-pen. (Light pens have been around a really long time; see them in use in the 1971 movie The Andromeda Strain.) The light-pen allowed you to point to a spot on the screen, but its precision was complicated by the fact that you were partly blocking the very thing you aimed at.

The mouse solved this problem by abstracting what you were pointing at from how you were pointing at it. It took some getting used to, but because you were learning an entirely new mode of interaction, not ditching an existing one that did the job anyway. The fact that a mouse, or some similar pointing device, ships with just about every computing device above a certain size is proof of how useful this turned out to be. (The mouse also works with a greater variety of devices.)

"But what about touchscreens!?" All right, I heard you in the back. Don't hold your breath for touchscreens to kill the keyboard, either.

Besides, why would you want that? The only reason we have touchscreens on tablets and smartphones isn't because touchscreens are such a great improvement over physical switches. It's because they simplify the design, and for something meant to be portable and light, the less hardware, the better. Small wonder why Microsoft's engineers labored to make the Surface keyboard so minimal: they didn't want people to feel like they were lugging around anything extra.

All of the efforts I've seen so far to make typing on a screen less clumsy have been half-measures. Sorry, vibrate-on-press isn't the same as an actual keystroke. Tactile feedback is only something you give up because you have to, not because you want to. Most of the quick fixes I've seen, like the TouchFire for the iPad, are just that: quick fixes, not actual solutions. Only something like Swype seems to be a step in the right direction. The speed improvement I get from using Swype is actually quite substantial... except for the one time out of five when my finger spazzes out and I have to delete a word and start over. I suspect that drives the average way down.

And then there's voice recognition, which I admit has improved quite a bit since my experiments with products like Dragon NaturallySpeaking. It also works well for phones. The few times I've resorted to Google's voice-driven search system it's given me results that were both coherent and useful.

But for a production environment like a PC, speech is less useful for one major reason: Typing is unambiguous, speech far less so. The computer may be able to make contextual inferences about whether or not I said "to", "too", or "two" (or, heck, "tu" if I'm throwing in some French to be sassy), but in the time it takes to fix such mistakes — far less, really — I could have just typed the words in question and be done with it. Worse, much of the kind of typing I do doesn't lend itself to being easily processed by voice recognition. (I should note none of this is meant as a slap at those who use voice recognition because they don't have a choice.)

If the keyboard is going to be killed by anything, it'll be by the one holy grail of user interfaces: A direct neural connection between the user and the computer, with all of the fascinating and scary possibilities offered through such a system. The things I'm confident it's not going to be killed by are touchscreens — or, for that matter, other kinds of keyboards.