Samsung Ventures has bought a stake in Fixmo, which sells MRM, or mobile risk management solutions. Their SafeZone product creates a separate, secure area on iOS or Android devices for confidential data and apps, similar in some ways to Good Technology's solutions. It's especially well-suited to a BYOD environment, where the company can't completely control and trust the device. The move may reinforce Samsung's SAFE program for security standards in Android devices.
Serdar Yegulalp
Contributor
January 23, 2013

You know Samsung: they're one of the world's biggest electronics companies, threatening to eclipse everyone from Sony to Apple. BlackBerry and Research In Motion, you also know: the latter is the creator of the former, and is struggling to turn its brand around in the face of severe competition by everyone from Apple to, well, Samsung.

But when Samsung Ventures, an investment group that bankrolls various efforts on behalf of the Korean electronics giant, bought a stake in Fixmo, the word on everyone's lips was: "Who?"

Fixmo Inc., a Canadian security-software firm, creates and markets MRM, or mobile risk management solutions for companies. Their product SafeZone, for instance, lets an administrator create a protected, encrypted container on a user's device, inside which all of their business apps and communications are encapsulated. The rest of the device can function as it normally does, with all of their games, photos, and music. Both iOS and Android are supported. (RIM's current MDM solution, BlackBerry Mobile Fusion, supports iOS and Android devices as well.) 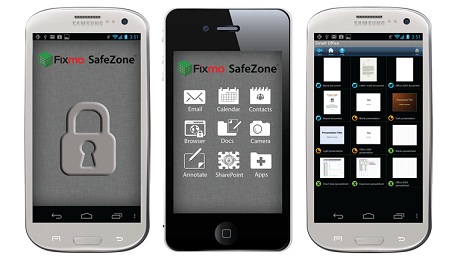 Fixmo SafeZone creates a secure container for data and applications, protecting them against insecure apps and content elsewhere on the device.

The SafeZone container is somewhat analogous to Good Technology's security solutions. The idea is that even if the user is irresponsible and compromises the security and integrity of the rest of the phone, the container with all its sensitive assets is protected. It's especially well-suited to a BYOD environment, where the company can't completely control and trust the device.

Fixmo and RIM are connected by more than just shared business concerns. Tyler Lessard, former VP of BlackBerry Global Alliances and Developer Relations at RIM, left his position there at the end of September 2011 and went to work for Fixmo as their chief marketing officer.

This isn't the only reason Samsung's stake in Fixmo, as reported in a Bloomberg article, has been interpreted as a pre-emptive strike at taking on RIM's business users. The Korean company has already done a fair amount of work to make its Android-powered, business-oriented phones and tablets secure and manageable via their SAFE program, their existing MDM spec. Samsung may be looking to Fixmo to help craft software solutions for the next generation of SAFE-spec devices, especially since Fixmo's track record in this area includes helping develop software for the National Security Agency to protect its own devices.

Samsung is currently the worldwide leader in smartphone and mobile-device sales, having racked up 28% of the entire market in 2012. (Apple, #2, has 20%.) RIM is projected to have its market share dwindle to 5% or less, with few people — analysts, corporate admins, or consumers alike — placing much stock yet in the company's plans to revamp its phones and their underlying operating system.

Apple, too, has been feeling a pinch, as their shares have dropped nearly 30 percent since September (down to $504 or so from its high of $750.07) and losing some $190 billion in market value for the company. Its sales have slowed due to both market saturation and the prevalence of high-quality and less-costly competitors — namely, the newest phones built with Android 4.x.

If Samsung decides to bake Fixmo's solutions directly into its products, that would give them a useful edge in corporate deployments by strengthening the baseline security level of their devices. SAFE is an open standard, and many third-party MDM solutions directly support it, so the security profile of the whole Samsung ecosystem would benefit.

Samsung's hardware competition includes not just Apple or RIM, but other Android smartphone makers that have been touting security and manageability, such as Motorola Mobility, the unit of Motorola sold to Google earlier this year. The latter company's original push towards making major inroads into corporate mobile computing via the DROID 4 and its "Business Ready" phone lines (the latter using technology harvested from Motorola acquisition 3LM) have all but petered out. The latest DROID RAZR models are geared mainly at the non-corporate end user.

Samsung is far from the first company to provide Fixmo with investment capital. Fixmo received $6.5 million in Series B and $23 million in Series C funding in June and November of 2011, respectively. And Motorola Solutions Inc., an investment arm of Motorola that is not connected to the Motorola Mobility division, also had their venture capital division provide investment funding to Fixmo in August of last year, for "research & development and global market expansion."