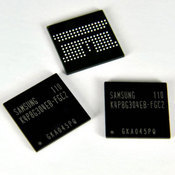 Samsung said Thursday that its 4 Gb, low power double-data-rate 2 (LPDDR2) DRAM is available to device manufacturers. DRAM is the system memory used in running the device's operating system and applications.

Samsung has managed to boost speed of its DRAM, while reducing size and energy use, by shrinking the size of the circuitry to 30 nanometers from 40 nm in the older technology. The latest product has double the memory and data transmission speed. The latter has been bumped to 1 Gb per second.

The improvement in DRAM from chipmakers like Samsung is important in order to keep up with user demand for more powerful mobile devices. At the same time, users want to carry smaller and lighter devices.

"Mass production of 4Gb LPDDR 2 is a tremendous advancement for the mobile industry, one that will enable our OEM (original equipment manufacturer) customers to move quickly in launching better differentiated high-performance mobile devices into the market." Wanhoon Hong, executive VP for memory sales and marketing at Samsung, said in a statement.

Samsung is currently making 1GB memory packages by stacking two 4 Gb chips. To achieve the same amount of memory, Samsung had to stack four of the 40-nm, 2 Gb DRAM. The fewer chips has led to a height reduction to roughly a third of an inch from about four tenths of an inch, the company says. The new DRAM also consumes 25% less power.

Samsung plans to begin mass production of 2 GB packages of DRAM next month. The higher capacity is expected to give device makers more headroom in running beefier applications on the new dual-core processors hitting the market. Smartphones are expected to consume 36 times more DRAM in 2014 than they did in 2009, while consumption by tablets is expected to rise 100 times, according to iSuppli.

Mobile DRAM is the fastest growing segment of the market, with shipments expected to rise 71% this year from 2010, iSuppli says. Shipments this year are expected to reach 2.9 billion gigabits, reaching 20.5 billion Gb in 2015.

At the end of the fourth quarter of 2010, Samsung had about 41% of the total DRAM market, which amounted to $3.6 billion, according to iSuppli. Samsung's closest rivals include Hynix, Elpida, Micron, and Nanya.