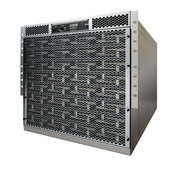 SeaMicro has introduced its second low-power server based on Intel's Atom processors, and its been optimized for running applications often found in cloud-computing environments, such as online gaming and social networking.

The SM10000-64 follows the SM10000, which debuted last June. Both systems solve similar problems, but the latest product delivers much higher performance-to-power ratio.

The new system's biggest advantage over the earlier system is the use of 256 Atom N570 dual-core processors that support 64-bit operating systems with 4GB of OS-addressable memory. The 10u rack system provides a total of 512 1.66 GHz x86 cores. The older SM10000 used 512 1.6 GHz single-core Atom Z530 chips, which supported only 32-bit OSes and provided just 2GB of addressable memory.

SeaMicro's systems are built to handle large volumes of Web transactions that involve small bits of information. Such applications would include search, email, online gaming, and social networking. The systems are not built for handling database applications. Those kind of heavy-duty applications from Oracle or SAP still need the power of a server running multiple Intel Xeon or Advanced Micro Devices Opteron processors.

But the SM10000-64 will do the trick for high-volume Web transactions that don't involve financial transactions, such as credit-card processing, Andrew Feldman, chief executive of SeaMicro, said in an interview. Using a Xeon or Opteron server for such tasks is "kind of like taking a space shuttle to the grocery store."

SeaMicro is not the only tech company targeting the market for low-power servers that are useful in cloud environments. AMD is making low-power Opteron processors and Nvidia is building ARM-based CPUs that could one day be used to power PCs and servers.

This month, Nvidia introduced a quad-core Tegra processor and said it would be in tablet computers set for release in August. Qualcomm and Texas Instruments also plan to release similar chips.