Built primarily for browser-based tasks and for multimedia playback, the XS295 supports SATA storage and up to 4 GB of DDR2 system memory.
Antone Gonsalves
Contributor
May 28, 2009 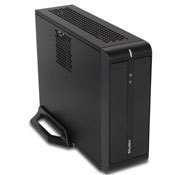 PC maker Shuttle introduced on Wednesday a fanless mini-desktop that's almost a tenth the size of a regular desktop.

Shuttle has engineered the XS295 to consume less than 50 watts of electricity at its maximum power usage. The system is powered by VIA Technologies' Nano U1700 processor, which competes with Intel's Atom chip.

Shuttle's mini-desktop is built primarily for browser-based tasks and for multimedia playback. The system supports SATA storage and up to 4 GB of DDR2 system memory.

Shuttle didn't release pricing and didn't say when the XS295 would be available. The computer maker specializes in small PCs.

Intel Atom is used in the majority mini-desktops, also called nettops, and mini-laptops, called netbooks. VIA is a small player in the x86 processor market, accounting for less than 1% of worldwide sales.

Nevertheless, the chipmaker recently garnered some attention when Dell announced that it had built a Nano-based server for a select number of customers. The XS11-VX8 server was custom-built for Web hosting environments.