The lines at Moscone began forming Sunday night around 9 pm, and by 3 am it was already a zoo. I suspect that maybe some people think it's a new Apple store, or it's an early line for tha last Harry Potter movie. Could this really be a developer conference? Could this really be the time when the nerds take over? I think so.

This opening keynote promises no new hardware (although nobody is ruling it out). This is the power of Apple, of Steve Jobs, an unprecedented combination that rivals any icon or iconic brand ever. Maybe not Bono and U2 or the Pope, but somewhere approaching that. Technology as the new religion.

9:57 a.m. PST: At this point, we're all staring at a big fat Apple logo. Listening to some old school music. But It's All Right by JJ Jackson. Funking out. I think Jobs is going to breakdance later. 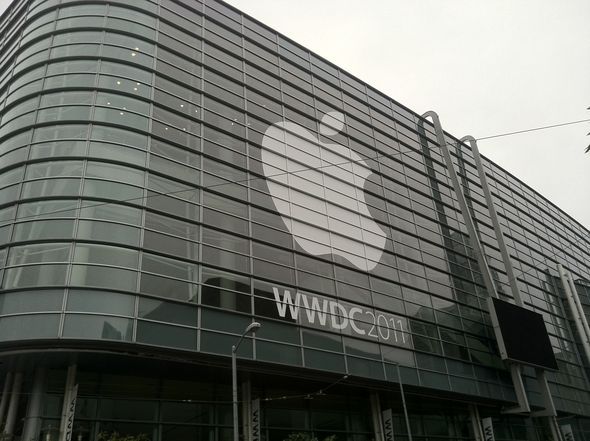 Outside Before The Event
View entire gallery 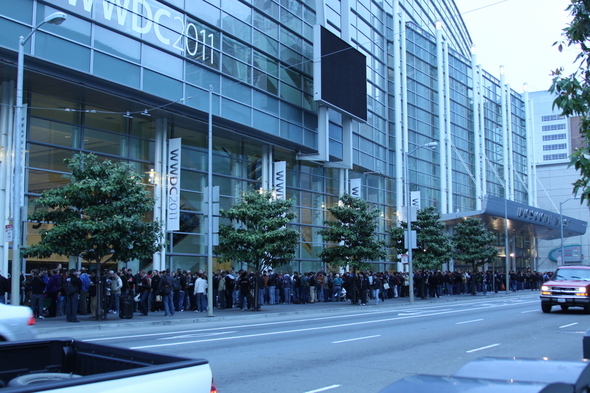 10:07 a.m. PST: Mac OS X was built 10 years ago, on a Unix foundation. He's showing what it looked like 10 years ago. Not really that much different than it is now, at least on the surface. Lion will have over 250 new features. He's only going to talk about 10. 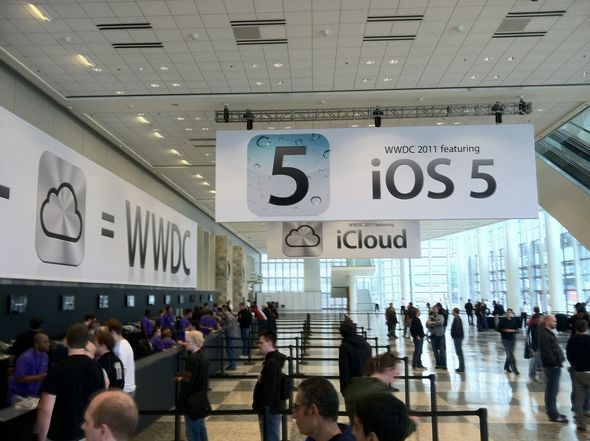 Cloud Is (Obviously) On The Agenda

10:08 a.m. PST: One of the first things . . . multi-touch gestures. Scrolling, tapp to zoom, dynamically zoom, swipe between photos. Schiller says there are more implications. You can get rid of the scroll bar, for example -- touch helps you eliminate that. 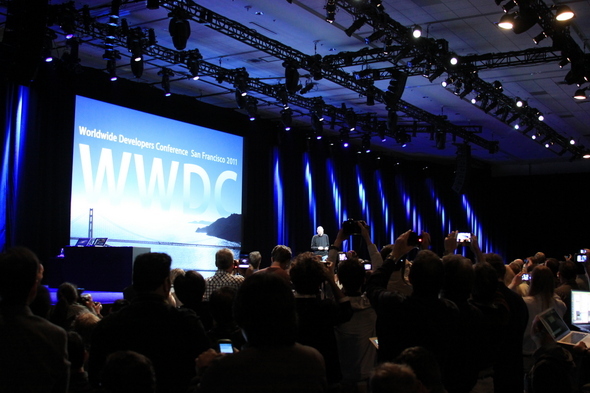 10:10 a.m. PST: All of the standard Apple apps will be full sreen out of the box (Safari, Garage Band, iPhoto). Safari will have a nice e-mail like list of open tabs to read through for later. 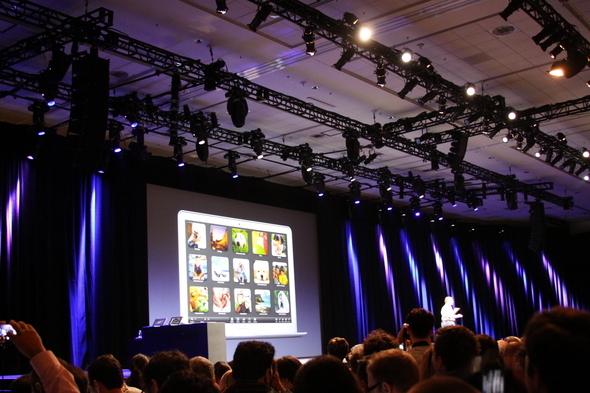 Next up for Lion OS: Full screen applications

10:11 a.m. PST: Next, Mission Control. Like Expose, Spaces, etc. All of it is unified now in a single view. All of your Spaces sit on the top of the screen, and it includes one just for your Dashboard widgets.

10:12 a.m. PST: Time for a demo of these features. Starting with Safari, no scroll bar, just scrolling with his finger, quickly, and -- in their words -- fluidly. Tap to zoom in and out, just like other Apple touch devices.

10:13 a.m. PST: Swipe between pages in Safari now. So you don't have to hit the back or forward button. Just swipe. Nice.

10:15 a.m. PST: Photo booth in full screen mode. As he moves, these little birds circling his head move with him. This is using face-tracking, built into Lion.

10:16 a.m. PST: Three-finger swipe takes you to Mission Control. easily click on an app, on the desktop view, on the full screen app, on the dashboard. You can also do a quick look at each of your windows.

10:17 a.m. PST: You can drag and drop apps into your Spaces and create a new one, really simply, really easily. You can delete the apps from Spaces and they fly back onto the Mission Control view. I would say this is really just taking the OS UI to another fabulous level. Not earth-shattering, but really nice. For developers, the ability to have some of these capabilities, like full screen apps, is fantastic as well.

10:18 a.m. PST: Now Schiller is talking about how the Mac App Store has surpassed every retail channel for buying any software anywhere. Clearly we're going to hear more about what's happening in the Mac App Store now ...

10:19 a.m. PST: What's new: The App Store is built right in. For developers, you can build in in-app purchases, push notifications, built in sandboxing, delta updates.

10:20 a.m. PST: Fifth new thing: Launchpad. Anywhere you are, you can make a pinch gesture and your apps all fly onto your desktop screen. All new purchased or downloaded apps can be put into the LaunchPad and you can organize in folders, just like in iOS.

10:22 a.m. PST: Seventh item is Autosave. Uh, duh. Not just the ability to do it in the background. The name of the doc, for example, is a menu item at top of doc -- you can do things like "revert to last opened" or you can "lock" it so it can't be changed. Another menu item is "Duplicate" -- one click and you're done.

10:23 a.m. PST: Eighth feature is Versions. Autosave is saving versions of the document as you are working. It's all automatic.

10:24 a.m. PST: But you can also do it manually. These are not full versions. It just copies the changes. So no worries about storage space. In the doc menu (which is new), you can browse all versions, with a time scale on it. You can make any one the current version.

10:26 a.m. PST: I like how it's just like iOS, so that I can organize my apps the way I like. The blending of the mobile OS and the desktop/laptop OS. These are really good ideas, and somewhat expected.

10:28 a.m. PST: OK, autosave. We get it. It saves for us. We're stupid, we need it saved for us. No need to demo this I don't think, is there? Now if it can auto-remind me to get a Father's Day gift, with suggestions, that would be good.

In the Versions feature, you can take things from one version and move it to another -- say a picture. That's nifty. 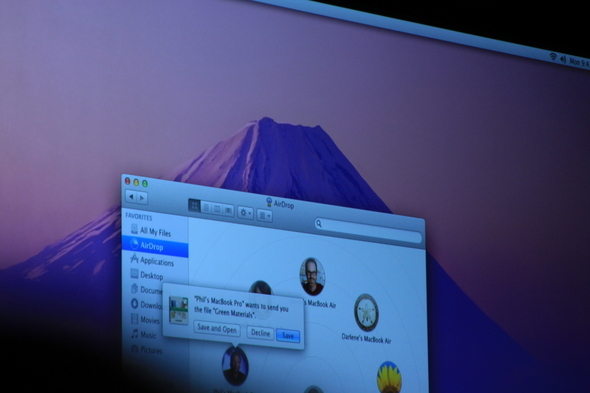 10:29 a.m. PST: AirDrop is a peer to peer network over WiFi. It's in the Finder. You tap it, see others who are running it. Drag and drop a document on top of someone else's computer. (Users have to confirm on both sides, thankfully.) It uses auto-discovery and auto-setup. It's just there.

10:32 a.m. PST: Conversation view in e-mail: This is really nice. Instead of it being in these colored, barred, indented view, it shows you all the mail in mini windows within the message. It also works when getting messages from any other mail system.

10:34 a.m. PST: The e-mail looks like the mail in iOS, but these new features are much better. I really like the idea of a favorites bar, but the search is great as well. This starts to make e-mail more of an information store, rather than "e-mail."

In search, you can actually do a multi-faceted search -- a person, a subject, a timeframe.

10:35 a.m. PST: In a conversation view, you can hover over a particular part of the conversation and reply just to that part. They also have a migration from Windows. Wonder how that works. 3000 new APIs for developers in Lion as well.

10:37 a.m. PST: Lion will only be available in the Mac App Store. Downloads and upgrades just like any app. About 4GB in size. You can use it on all of your authorized Macs. $29. Wowser. Past Mac OSes were about $129.