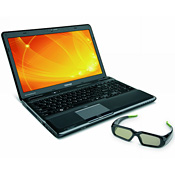 "Our 2D to 3D conversion software allows people to go back into their DVD libraries and experience their favorite content all over again in stunning 3D without having to repurchase anything," said Carl Pinto, VP of product development, Toshiba America Information Systems' digital products division, in a statement.

The amount of available 3D content is increasing and more films are slated to be released on 3D Blu-ray discs before the holidays, the company said. Nvidia is also launching 3D Vision-ready PC games and 3D streaming video events.

The Satellite A665-3D Edition laptop features a widescreen LCD display with LED backlighting, an optional LED backlit keyboard, and a 120-Hz refresh rate. Toshiba's Sleep-and-Music technology is also integrated, giving users the ability to play music from MP3 players through the laptop's speakers even when the laptop is powered down. Later this fall the laptop will support Nvidia 3DTV Play software so consumers can attach the A665-3D Edition to a 3D-ready TV.

The Satellite A665-3D Series laptops will start at $1,299.99 and will be available in October at retailers including Best Buy and also from Toshiba.com.