Windows Blue/9: No Desktop? No Way!

A leak of an allegedly major revision of Windows 8 hit the web last week. Microsoft's focus seems to be on developing the Metro interface, but will they ever actually remove the desktop? Absurd!The desktop is a major strength of Windows!
Larry Seltzer
Contributor
March 25, 2013

There was a flurry of blogosphere action over the weekend related to a leaked version of a future Windows build. It's code-named Windows Blue and for obvious reasons some are calling it Windows 9, but who knows what it really is. I recommend the excellent video put up by WinBeta for a tour.

The focus seems to be all on the new Windows interface (what everyone but Microsoft calls Metro). There are new tile sizes, new gestures, and a new ability to "snap" more than one app together on the desktop, as shown here: 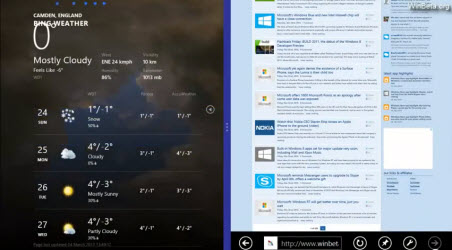 What got me mad enough to write this column was the assertion by some (mostly Paul Thurott) that, as Paul puts it:


All the action in this build is in PC settings, and if you were looking for any further proof the desktop being eased out going forward, look no further than this. As noted in the previous report, there are a ton of new settings in there now, including many items that were previously only available in the desktop-based Control Panel interface. This is clearly an indication of how we get from here (Windows 8) to there (Windows 9, with potentially no desktop).

Easing out the desktop? Can anyone actually believe this? Earth to Paul: The Windows desktop is a major strength of the operating system, *especially* as compared to the competition. There is an ocean of expertise and customized software out there on the Windows desktop, and Microsoft would never alienate these people. As it happens, these people are concentrated in the large enterprises on which Microsoft depends for the lion's share of their immense revenues.

In fact, what really makes Windows 8/Metro stand out is that it works side-by-side with the desktop mode. The right strategy should be to expand their ability to work together, for instance by letting Metro apps work on the desktop. And, as I've said before, Microsoft needs to stop hiding the desktop in Windows 8 and make it more like the Windows 7 interface. 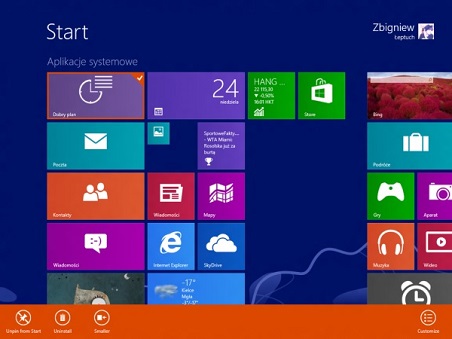 Overall I'm underwhelmed by what I see in Blue, but it's basically a leak of a pre-alpha version, so I wouldn't expect much at this point. Is it just flashy stuff in the Metro UI? My respected former colleague Joe Wilcox at Betanews thinks it's all about the bling. "Perception is everything" Joe says, and actual utility is less important in the market now, including the stock market, than the perception that Microsoft is turning Windows into a modern OS that can compete with Apple and Google. I'd hate for this to be true, but it might be.

But even if the highest priority is to improve the Metro interface, that's not a reason to abandon the desktop interface. A strong desktop *and* a strong touch interface are the magic combination. Without the desktop, Windows is just another touch OS.