Your guide to what's new, useful, and just plain fun.

What Time Is It?
With a mechanical perpetual calendar correct until Feb. 28, 2100, the Kinetic Perpetual dress watch would suit Rip Van Winkle. No batteries required; the kinetic power comes from just strapping it on your wrist. When not worn, it will operate normally for six months, then go into "sleep" mode for up to four years. The accuracy remains, but the hands stop; they automatically reset once the watch is put on again. Seiko calls the feat its "mastery of mechatronics." We just call it cool. Different watch models, available in Europe, are priced at around 300 euros (about $360). 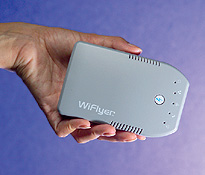 A Flying Leap
Here's another way to get cheap long distance (as if there weren't enough already): Take a Wi-Fi router, a voice-over-IP adapter, and a modem and you've got the WiFlyer+V. It plugs into a standard telephone jack, and your home phone then shares Internet and landline calls. The wireless connection eliminates the need for long cables or complex wiring. The system, from Always On Wireless, will be available next month for $60 along with the $12.95 per month WiFlyer Phone Service. 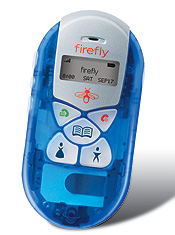 R U There?
Two devices from Firefly Mobile and Enfora, while they may look like phones, are more accurately described as portable intercoms. Why? Parents determine how and when they're used. The point isn't to give kids their own phones, but to be able to reach them in an emergency. The Firefly holds up to 22 numbers. Enfora's TicTalk sets limits on minutes and the time of day talking is allowed and even includes games that teach math, spelling, science, and social studies for grades one through six. That's one way to make a phone uncool. Both devices are priced at $100. Airtime is purchased in prepaid cards. 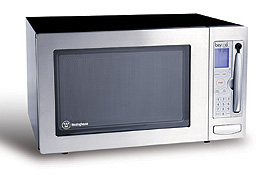 Dinner's On
Could it be? Microwavable popcorn that never burns? Whatever's for dinner, just scan the bar code on the package and Salton's Beyond Microwave takes over from there. It already knows cooking times for more than 4,000 UPC codes, and you can program more at home. Now, if only it could make nuked food taste better. The microwave is priced at $166, not including a wireless link for the scanning wand. 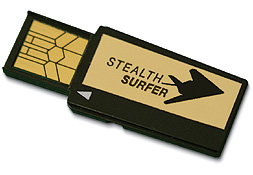 Secret Surfing
Whether you're up to no good at work or just plain paranoid, the StealthSurfer II cleans up your cookie trail. Plug in the Windows PC-compatible key-sized USB device to store any sensitive Internet files instead of leaving them on your computer. The secrets of your surfing history are safe because you take them with you. Made by Stealth Ideas, the device comes with storage of 128 Mbytes to 1 Gbyte, with prices ranging from $99 to $299. It keeps your cache clear; a clear conscience is up to you.

21st Century Card
The latest interactive business card doesn't need a PC or anything else to display its information. The rCard from CEO IQ has a viewing screen and navigation button to scroll through data and click on links. It also plays video, transfers media from a PC via infrared or USB cord and docking station, and has up to 1 Gbyte of storage. Is this an idea whose time still hasn't come? Here's a clue: Count on spending at least $25 a pop for rCard's disposable version. There's also a rechargeable version.

Got It Covered
New neoprene covers from Shoreline come with a zipper back door for port access and fit snugly around screen and keyboard to protect laptops when open and closed. Shoreline's lightweight cases (less than a pound, $20 to $25) have elastic corners to hold them on the computers, and you can use them without uncovering them. Fit screens 10.6 to 17 inches.

Music And Maps
When is the latest GPS device not just a GPS device? When it's an MP3 player, too. (Better to soothe you when its directions foul you up.) Magellan has even packed photo-viewing software onto the Roadmate 800's 3.5-inch color touch screen, which shows off the road ahead in 3-D. The device takes drivers beyond the mere dispensing of directions in other ways as well: Built-in street maps include 6 million points of interestrestaurants, gas stations, ATMs, and airports. It also improvises new routes to bypass traffic. It should be available later this month for about $1,000.

For full reviews of GPS devices, MP3 players, and more, go to informationweek.personaltechpipeline.com.

Back Issues | Must Reads
White Papers
How to Plan for Endpoint Security Against Ever-evolving Cyberthreats
A Pragmatic Path to SASE
How five organizations are elevating WFH into a long-term strategy
Run and Transform: Micro Focus + Jaguar Racing
The 7 Deadly Sins of Access Control, and How to Avoid Them