Top 10 Government IT Innovators Of 2013
(click image for larger view)
The world of space enthusiasts -- accustomed to following the exploits of the Mars Curiosity rover, the Hubble Space Telescope, and the International Space Station -- were greeted with an alien message Tuesday: "Due to the lapse in federal government funding, this website is not available."

NASA wasn't alone. A survey of various government websites and services showed that the impact of the government shutdown is real for citizens and far-reaching for agency leaders scrambling to maintain their operations in the sudden absence of funding.

At the Department of Health and Human Services, senior officials are not only dealing with the requirements of a shutdown, but also with the launch of the health insurance marketplaces. The marketplaces will remain available to consumers on HealthCare.gov as part of the Affordable Care Act. Other parts of the agency, however, will be hit hard. HHS's shutdown contingency plan shows that 52% of employees are being furloughed, leaving just 48% on the job.

When it comes to IT, HHS estimates that approximately 400 employees responsible for the protection of computer data are expected to continue working, with the majority of them at the National Institutes of Health (NIH). The staff that remains on duty at NIH will maintain the hospital data network, clinical research information system, communications systems, radiology information system, and other components that are directly related to electronic patient medical records. During the shutdown, databases will not be routinely updated, which is typically a major part of operations, HHS said.

[ Government IT budgets were hard enough to manage before now. Read Dysfunctional Congress Hurts Government IT. ]

The Department of Veterans Affairs (VA) will continue providing medical services, but benefit programs might be affected, according to VA officials. In a document posted online, the agency said that claims processing and payments -- specifically in the compensation, pension, education and vocational rehabilitation programs -- will remain operational through late October.

In recent years, the VA's backlog of compensation claims for disabilities related to military service has skyrocketed. To combat the problem, the agency has deployed a paperless Veterans Benefits Management System (VBMS) in all 56 of its regional offices, implemented a Veterans Relationship Management (VRM) system to give call center agents a standardized way of viewing veterans' information, and launched an eBenefits Web application that integrates with VBMS and allows claims to be filed electronically.

A prolonged shutdown might result in a suspension of these programs if funding is exhausted, the VA said. It could also delay the agency's plan to eliminate the backlog of compensation claims by the end of 2015. 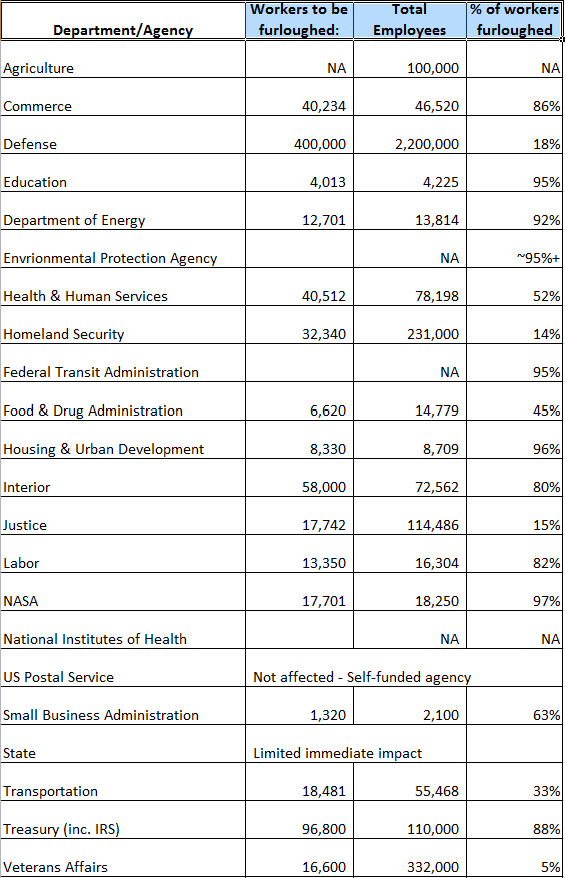 The General Services Administration (GSA), which provides a variety of services to the federal government, has suspended government operations, according to a notice posted on its site. The agency, however, stated in its shutdown plan that GSA-owned and -leased buildings will remain open and operate in "weekend mode." USA.gov and the Spanish-language version GobiernoUSA.gov will be available, but not updated. The GSA said it will not maintain other websites providing government information and services to the public.

The shock value is wearing off like the after affects of a Super Storm Sandy, the suffering of those cut off from needed government services -- and of public servants beginning to add up the days of lost income -- continues even if the media cameras have begun to move on.
Reply  |  Post Message  |  Messages List  |  Start a Board

It is patently unfair. Public service isn't an easy business. But a handful of Congressmen are about to put 800,000 workers into personal financial peril -- and probably the nation's reputation, once the debt ceiling is reached -- all to make a point.
Reply  |  Post Message  |  Messages List  |  Start a Board

Panda cam, Rover cam, etc - examples of the effects of the shutdown, yes. But the furloughs strike a chord for me. Real people, real jobs, real paychecks disappearing.
Reply  |  Post Message  |  Messages List  |  Start a Board

It would be a shame if the shutdown scuttles NASA's next Mars mission -- the Mars Atmosphere and Volatile EvolutioN (MAVEN) spacecraft -- which must launch by mid-December (or be delayed until 2016).
Reply  |  Post Message  |  Messages List  |  Start a Board

There have been 17 shutdowns since 1977. Most lasted 1 or 2 days. The last, ending 1996, lasted 21 days. One thing that's different this time around is that unlike 17 years ago, when about half of federal agencies had already been funded, none are funded this time.
Reply  |  Post Message  |  Messages List  |  Start a Board
Editors' Choice
Hot Topics

More Informa Tech Live Events
Enterprise Database Strategies for 2020Making Zero-Trust Work for Work From HomeNow That Ransomware Has Gone Nuclear, How Can You Avoid Becoming the Next Victim?