50%
Tweet
Here's a look at 802.11n routers from Apple, Belkin, Buffalo, D-Link, Linksys, and Netgear. Read on to find out which device is your best choice.
Belkin N1 Vision 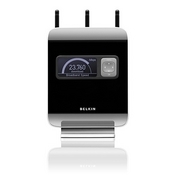 The Belkin N1 Vision offers an LCD screen that provides you with more information than you'll know what to do with.
View the image gallery
When you head to the store for an N router, you must decide which factor is most important: higher performance or user-friendliness. If you covet the former, move on. But if it's user-friendliness you're looking for, look no further than the Belkin N1 Vision.

The Belkin N1 Vision offers something other N routers do not -- an LCD screen that provides you with more information than you'll ever know what to do with. To the right of the screen, the N1 sports a handy set of buttons that allow you to work your way through the menu, choose options like SSID and encryption, and get status updates as needed. Even better, the router displays extras like a map of all the computers connected to it and usage over the past 24 hours.

One of the best features of this Draft 2.0 router is its inclusion of a guest SSID, which effectively allows protected guest access while prohibiting malicious users to use your network. The guest SSID feature allows friends to get on the Internet, but they cannot access other areas of the network, including other computers. It also generates a guest password for added security.

Unlike other routers, the Belkin N1 Vision features three antennas that protrude out the back of the device. While this makes for a stylish design, it also contributes to this router's poor performance due to the inability to position the antennas in the direction of the wireless device.

While measuring on a dedicated N-network, I witnessed speeds of roughly 65Mbps from 10 feet away; this less-than-impressive performance dropped off significantly to 60Mbps at 50 feet. At 200 feet, the measured throughput was just 20Mbps. If included in a mixed environment (N and G devices), the witnessed speed at ten feet was almost 30Mbps.

Range performance was equal to that of the other routers in this round-up -- it extended to 100 feet past the back corner of my home.

The Belkin N1 Vision is a sleek router with an LCD that makes it easy to get information about the workings of the router. Unfortunately, that also means it comes with a steep price of $199. Performance on the router could have been better, and except for range improvements, you probably won't notice a difference between your current G router and this device if you're running in a mixed environment.