50%
Tweet
Here's a look at 802.11n routers from Apple, Belkin, Buffalo, D-Link, Linksys, and Netgear. Read on to find out which device is your best choice.
Linksys Wireless-N Gigabit Router 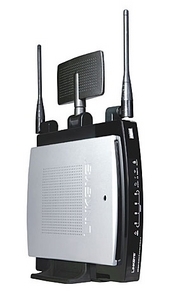 Much like every other Linksys router, the setup was quick and efficient. In a matter of minutes, the WRT350N was up and running. The router comes with a disc that can be used to set it up and install necessary drivers, but most people can leave that in the box and go it alone.

Once set up, a typical Linksys administrative page helps you customize the router's settings. Much like the D-Link page, the Linksys menu system is cluttered and not very well thought out. More often than not, you'll spend most of your time looking for a setting that is hidden in an entirely different menu. For example, if you want to encrypt your home network, you would think that the settings would be found under the Security tab -- however, you'll actually find it under the Wireless tab. Not only did this add more time to the initial setup than necessary, it made me come to dread the thought of going back into the page.

Linksys' decision to include a USB port on the back of the device was a welcome addition. Much like the Airport Extreme, the router is capable of accepting printers and storage devices that can be used by any computer (wired or wireless) on the network. This feature comes in handy when you want to transfer a large file from one computer to another.

Performance was not what I hoped to see from the 350N. At a range of ten feet, the router only offered speeds of 75 Mbps over a dedicated N-network. As I increased the distance to 50 feet and 200 feet, its speed trailed off to 70 Mbps and a crawling 17 Mbps, respectively. In mixed network mode, the router was only able to dole out speeds of 25 Mbps at a range of ten feet -- unacceptable for a router at that price.

All in all, the measured range was roughly the same as the Airport Extreme (100 feet), but still significantly worse than the Buffalo and D-link routers.

With significant performance issues and a difficult customization utility, the WRT350N doesn't hit the top of my list.

Back Issues | Must Reads
White Papers
2020 Gartner Market Guide for Network Detection & Response
How You Can Evaluate Your Org's Cybersecurity Readiness
How to Implement Risk-Based Vulnerability Management
How to Prioritize Risk Across the Cyberattack Surface
Forrester: The Rise of the Business-Aligned Security Executive